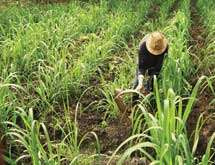 According to Trinidadian legend, any traveler who eats a Cascadura – a local freshwater fish – while visiting Trinidad may go off and travel elsewhere, but they will end their days in Trinidad. The fish is considered a local delicacy, and if the legend is true, the study of the Cascadura and other animals and agricultural products will ensure Trinidad has enough resources to feed all of the visitors who eventually will return.

Cascadura, as well as sugarcane, sheep, goats, rabbits, swine, poultry, cattle and water buffalo are some of the goods studied at Trinidad’s Sugarcane Feeds Centre (SFC) in an effort to support the local economy. SFC was established in 1976 as a joint venture between the University of the West Indies in Trinidad and McGill University in Canada; the goal of the center was to research various uses of sugarcane and other agricultural byproducts.

Soon after the center’s inception, however, its work evolved and expanded, and in 1981, Trinidad’s Ministry of Agriculture, Land and Marine Resources assumed responsibility of its funding. Its current objective is to promote integrated agriculture throughout the island, with a focus on sustainable farming and agritourism.

“We focus on research, demonstration, outreach to farmers and training,” Director Suresh Benny explains. “We have some level of autonomy from the government as well as a lot of control over our finances.

“With our easy access to funds, our work can be fast-tracked if necessary,” Benny adds. “Our goal is to help and support the Trinidadian farming community, and we have a heavy emphasis on protecting the local biodiversity.”

SFC starts by researching and developing practical and sustainable approaches to farming that have a strong emphasis on environmental protection. When a new system or method is developed with sustainable practices, SFC works with local farmers to show them how to implement it on their own farms.

“One example is that animals feed on grass,” Benny says. “With cows, they have some grass that they like and some they don’t – just like humans have different tastes. So, the cows are in a pasture all day feeding, and at the end of the day, whatever is left is turned into compost and used as a conditioner for plant production.”

Additionally, he notes, high levels of manure come out of any farm that raises animals. SFC found that when the animals are fed healthy, manufactured feeds, they produce highly nutritive waste, which is then turned into compost and used as fertilizer for the crops.

SFC also has used dasheen – a root crop of sugarcane that extracts nutrients from the soil and liquid in which it is placed – in its aquaculture research. When using dasheen as a biofilter for its aquaculture operations, SFC found the root worked over “a considerable distance,” and purified the center’s property.

“We’ve found that when we put liquid feces in a biodigestor, the waste is broken down rapidly, and we can use the resulting liquid as a crop fertilizer, which is less acidic than fresh manure,” Benny says.

SFC does not limit its research to Trinidad’s farming and food industries, although both remain part of the operation’s core focus. Understanding the Caribbean already is a well-established tourist destination for North American and European residents, SFC has started to find ways for local farmers to directly benefit from the tourism market.

SFC has been working with Trinidadian farmers to modify their operations somewhat to support agritourism business. If farmers raise livestock for food production, for example, they could add animals – such as sheep, ducks and rabbits – to their land and create a petting zoo to attract tourists.

“We want to help farmers convert their farms into local attractions,” Benny says.

“All of our programs are free and open to the public, and we really allow farmers to immerse themselves in our operation,” he adds. We get about 3,000 visitors annually – which is huge for Trinidad – and this shows that we’ve been successful in expanding this sector of the local economy.”