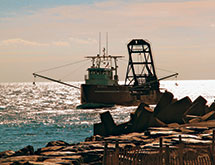 Based in Port Norris, N.J., Surfside Foods is one of two companies in the nation that specializes in processing Ocean Quahog (Arctica islandica) and Atlantic Surf (Spisula solida) clams and clam juice. The company’s roots go back to the family fish market, which specialized in scungilli, a marine mollusk also known as conch, that members of the LaMonica family started in Brooklyn in the 1930s.

As the scungilli business flourished, the family moved from Brooklyn, N.Y., to Cape May, N.J., to be closer to the supply of scungilli, which was being caught off the island of Cape May. As time went on, it became apparent to the LaMonica family that hand shucking the locally sourced surf clams was the next step to further their business.

Cape May Canners was formed, and the company, currently LaMonica Fine Foods, prospered. In 1976, the government implemented a restriction on the harvesting of surf clams, which in turn drastically reduced the supply of surf meat to the marketplace.

As an alternative to the surf clams, Ocean Quahogs began to fill the gap to meet the rising demand of clam meat. With the quahog being a smaller clam that could not be hand-shucked, it became necessary for a mechanized shucking plant to be implemented to complement the hand-shucking line. Thus, Surfside Foods was born.

Peter LaMonica agrees. “They feel that we care about it because it’s ours,” he says. “That’s why the fresh customers like us so much.”

John Kelleher, COO at Surfside, has been managing and operating vessels for the last 30 years. Thanks to his experience, he has enabled the Surfside fleet to efficiently harvest its 1 million bushels of clams per year.

“Quality really starts on the boats themselves,” Peter LaMonica asserts. “We take pride in the clams that are brought into the processing plant.” Surfside’s primary customers have always used fresh clam meat in their products, which at times can be unpredictable due to unpredictable weather.

A New Adventure
Surfside recently acquired one of its former competitors, J.H. Miles & Co. Inc., based in Norfolk, Va. The firm “supplied Campbell’s Soup with 50 percent of their clam needs,” LaMonica says. “We acquired Campbell’s as a customer.”

Along with the J.H. Miles acquisition, it was crucial for Surfside to recruit an experienced, hands-on shucking and freezing expert. In turn, Surfside reached out to Roy Parker Jr., whose more than 35 years in the industry is unparalleled.

“Our new customers require clam meat as a frozen finished product,” LaMonica says. “Right now, we are processing the clams, shipping the clams to Virginia to be chopped and frozen, sending [them] to a storage freezer, then eventually to customer plants throughout the United States, Canada and Australia.”

LaMonica sees a strong future for Surfside. “We’ll continue to grow and go after new customers, since we’ll hopefully have a new frozen line to offer,” he says. “Our goal is to continue serving our current customers and keep them satisfied. Our quality improves day by day in the plant and on our vessels.”