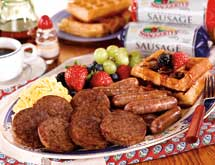 So much has evolved since Lonas Swaggerty founded Swaggerty’s Farm Premium Sausage from a small farm and production house in Kodak, Tenn. In 1930, the mom-and-pop operation began selling homemade sausage using the best cuts of pork, including the hams and tenderloins, after neighbors cajoled Swaggerty to share the recipe on the local market.

Swaggerty’s Farm Premium Sau¬sage became the retail face of the operation, but the family raised other products as well, including corn, tobacco and cows. The company’s current vice president of operations and third-generation owner-operator, Doug Swaggerty, explains that things remained fairly the same for the next 40 years. Then, in the 1970s, food safety really began to take off. Instead of cutting corners that often lead to demise, Swaggerty’s embraced the regulations and inspections and began to flourish under the new laws, acquiring HACCP and USDA certifications.

“That was when we laid the foundation of being a full-blown sausage producer,” explains Swaggerty, who officially joined the company in 1983. “We had a lot of growth in the ’70s and put ourselves on the map producing one-pound sausages. We did keep custom beef for a while but quit that in the ’90s and went all-pork sausage. From the mid-to-late-’90s, and into the early 2000s, and to where we are at today, we have seen double-digit growth. This business has grown mainly through word of mouth from a small mom-and-pop shop to what it is today.”

Swaggerty’s welcomed trends that have made the food industry better, such as food safety and automation. But for all the things that have changed, many things have remained the same. Swaggerty praises several employees who have been with the company for decades, giving them the credit for Swaggerty’s’ success.

Another constant is that the company is still family owned and operated, with a coming-of-age fourth generation showing great interest in joining the business, as well. Though it is producing from new facilities, it is still on the same property, which is now Swaggerty Road.

“I feel we put a lot of emphasis on the quality of what we are producing,” Swaggerty explains. “We are being consistent on our product and what we do. We don’t change things and tamper around with things just because. We stick to what we are good at and keep a very consistent and quality-oriented operation with a strong emphasis on food safety.”

Swaggerty’s launched The Butcher’s Favorite Recipe three years ago. It boasts qualities of the original recipe, including 100 percent pork, no fillers and gluten-free. However, the sausage is seasoned with the Butcher’s Favorite Blend of Seasonings and only available in the fresh meat case.

The year before, the sausage producer introduced the All Natural Recipe that possesses the same trademark qualities of the original predecessor, but without the MSG – only water, sugar, salt and natural spices are allowed. Like the Original 1930 Family Recipe, the All Natural Recipe is available in patties, links and rolled sausage.

With the recent completion of a new 33,000-square-foot warehouse and distribution center, all three product groups could be available in more places. Under its own brand, Swag¬gerty’s Farm is available in grocery stores in more than 30 states. Through private-label manufacturing, the company’s quality is available in nearly all 50 states.

Doug Swaggerty says the company is looking to expand its presence – which is strong in the South and growing in the Midwest – to every state coast to coast. “We purchased 29 acres for our future growth because the first thing you need in order to grow is a place to grow,” Swaggerty explains.

“We have more room and ability to stock items,” he adds. “Freezer space is a premium in this business, and we were able to build more just 200 yards from our current facility.”