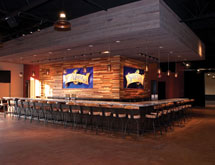 Back in the early 1990s, University of Colorado – Boulder roommates Freddy Bensch and Kevin McNerney came to the stark realization that they may be more into beer than books. Sure, other college students may feel the same way, but how many of them truly get serious about their passion, read up on the science behind it and turn this knowledge into a successful business?

After college, it was an easy choice for Bensch and McNerney to dismiss the idea of getting a “real job.” Instead, they jumped head first into the business of brewing by enrolling in the American Brewers Guild in California to study fermentation science.

Since then, Bensch and McNerney have stayed true to their idea of high-quality craft beer and created a business they could be proud of. Fifteen years later, SweetWater beer has become the flagship craft beer of the Southeast.

“We’ve been [brewing beer] since we were about 21, so we’re pretty experienced by now,” Bensch explains. “Our palates are aggressive, and we like very flavorful beer. We’ve built this business around brewing the kind of beer we like to drink.”

SweetWater plans to stay local and expand only as long as product quality does not suffer. At the moment, SweetWater beer can be found in several states throughout the Southeast, which makes keeping a close eye on quality control that much easier. Because SweetWater beer is unpasteurized, each brew is best consumed within 90 days, making quality control and freshness all the more important to the company. Enter the “Hop Cop,” whose full-time responsibility is to check in on each store, restaurant and bar on a regular basis to ensure only the freshest products are sold.

“We don’t cut any corners around here,” Bensch explains. “SweetWater has become an extension of us, which is why I think we’ve been successful. People can tell we’re trying to be who we are, and we’re an honest brewery.”

SweetWater specializes in ales more than any other type of beer, with five year-round offerings including SweetWater Blue, a unique, light-bodied ale with a hint of blueberries; India Pale Ale, loaded with intense hoppy character and subjected to an extensive dry-hopping process; 420 Extra Pale Ale, the most popular due to its stimulating hop character and crisp finish; Exodus Porter, delivering distinct hoppy notes with waves of rich chocolate flavor; and Georgia Brown, featuring a deep, caramel and chocolate taste with an undercut of hops.

SweetWater’s current seasonal varieties, irreverently named and well-suited to the fun and relaxed culture of the brewery, include Happy Ending, a dry-hopped Imperial Stout; Road Trip, a fiery pilsner fermented at ale temperatures for a full flavor; Motor Boat, a unique version of extra-special bitter beer; Festive Ale, brewed with generous amounts of malt and cinnamon, and Waterkeeper® Hefeweizen, with proceeds benefiting the company’s mission to raise awareness and promote the mission of Waterkeeper Alliance® members throughout the Southeast.

The company is clearly doing something right, considering the following these brews have developed, which has prompted a $19 million infrastructure expansion this year. SweetWater purchased nearby property, and went from 26,000 to 118,000-square feet of brewing space, packaging and bottling operations, as well as tasting and event space. The company gained an additional 400,000-barrel capacity as a result of the expansion, taking its total production capacity to roughly 500,000 barrels.

As part of its expansion, SweetWater is implementing BatchMaster Software, which Bensch believes will help streamline the production process, allowing the company to operate more efficiently. “We’re still in the process of installing the system, but we’re excited because it should help us out across the board,” he says.

Even during a slow economy, the company has managed to grow, and Bensch believes the craft beer industry as a whole continues to thrive. “The reason is that the population is looking for more flavorful, exciting beer, and they’re expecting higher quality from a flavor perspective,” he says.

Since SweetWater first opened its doors, the company has caught the attention of industry insiders, earning a variety of awards from the Great American Beer Festival for individual beers such as the SweetWater Ale, Exodus Porter and Sweet Georgia Brown. In addition, the company was also named the Small Brewing Company of the Year from the same organization in 2002.

“We are the only brewery east of the Mississippi to win that award,” Director of Marketing Steve Farace says. “But, quality and consistency are our hallmarks, and when you’re a small business like us, you make that a priority.”

Industry Ties
Working with the right vendors and building relationships in the industry is important to SweetWater, and Bensch believes this focus has a direct impact on quality. “We’re all about relationships here, and we definitely like to know who we’re doing business with,” he says. “Consumers also like to know who is making their beer.”

Paul Kirbabas, director of sales administration for United Distributors, has gained intimate knowledge of the brand and its followers. For the past eight years, he has represented Sweet¬Water in the state of Georgia, and has seen the consumer reaction to these products first-hand.

“When people open a bottle of SweetWater, they just enjoy this feeling of freedom,” Kirbabas says.

“It’s a great product that’s local, and everybody likes the feeling associated with it, because they feel like friends of the brewery.”

According to Kirbabas, SweetWater is gaining immense momentum in Atlanta, which he calls the epicenter of the South. In fact, he says, there is such great availability there that in most cases, where there’s beer on tap, there’s SweetWater. “It’s generated great awareness in other craft beer markets, as well,” he adds, calling SweetWater one of the city’s fastest-growing brands.

Today, SweetWater has become the 24th largest craft brewery in the country, with beer only available in Georgia and the five states it borders.

Many retailers see the SweetWater beer as a great “image” product to display, considering the creative and at times inappropriate – in a good way – product names. “Everyone has a different interpretation of the 420, for example, and it might make someone feel like they’re a little bit cutting-edge,” Kirbabas explains. “It’s like a hidden secret and everyone likes to be a part of something like that. They’re having a blast at SweetWater, and they’re blowing up at the same time.”

When Kirbabas first began representing the company eight years ago, he sold 200,000 cases. This year, that number tops 750,000. “That is a success story if I’ve ever heard one,” he said. “But, the biggest success of all is the size of Freddy Bensch’s heart. Once you meet him, his infectious energy will stay with you forever.”

Farace believes the people behind the label make a difference in creating brand loyalty and generating growth. Farace previously worked for Guinness, and sees SweetWater as a unique operation with a strong focus on the beer.

“The fact that the guy who started the brewery is still running the show after 15 years is pretty cool,” he says. “This is a brewer calling the shots, and everything is about the beer – it’s not like someone came up with a clever name but doesn’t care about the product they’re selling.”

An Atlanta Landmark
SweetWater strives to stay close to fans by offering regular brewery tours, event space and the chance to talk to the brewers behind the brand. In its old facility, which was located in a less-than-ideal industrial park, the brewery saw little interest from people wanting to tour the facility. “We had maybe 20 or 30 people come through for tours in our old facility,” Farace says.

The new facility’s event space often hosts weddings, high school reunions, trade shows, fundraisers and more. With the brewery playing host, and the beer front and center, these events often introduce people to all Sweet¬Water has to offer. Guests of events can tour the facility, taste samples and see for themselves what it takes to operate a brewery.

“It’s a really fun environment, and we get a great cross section of people, too, from folks who are just turning 21, to those who are in their 30s and 40s who are getting into craft beer,” Farace says. “We also find that many people who live in Atlanta show the brewery to their friends and family from out of town.”

Community Outreach
To stay connected with its customers, the company maintains strong connections to the communities it serves. SweetWater has long been involved in programs devoted to the cleanup efforts of the Chattahoochee River, and also donates a percentage of its profits to Camp Twin Lakes, serving children with serious illnesses and disabilities.

Bensch is proud that employees often become personally invested in these community outreach programs. “I’m stoked that our people really step up to the plate and are proud of what they’re doing here,” he says.