Back to Profile Gallery > Taco John’s 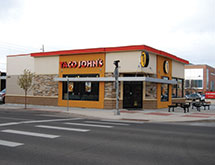 As the nation’s largest fast-food chains struggle to keep product costs low in a bid to recapture market share, Taco John’s sees an opportunity to lure increasingly discriminatory consumers. “I think the days of the dollar menu are probably over,” says Jeff Linville, CEO of the Mexican quick-serve chain. “And thank goodness, because I’ve never known a dollar menu to focus on quality.

“What we’ve decided to do is elevate our food beyond our competitors,” Linville says. The strategy has become especially important as outside forces are driving up costs. Beef prices are on the rise, eggs have become a premium product as the avian flu continues to kill thousands of chickens and states such as New York are setting higher minimum wages. Customers accustomed to paying $1.40 for a standard taco might not follow when restaurants are forced to hike the price to $3 to maintain the same profit margins. The quick-serve industry has little control over those market pressures, so Linville believes the answer is to justify those prices with better food. “People aren’t afraid to pay a little bit more as long as it’s a good-quality product,” he says. “If [a restaurant is] not in the quality game, you can see it. Brands are suffering.”

Taco John’s sees its commitment to quality as the key to growth. The Wyoming-based company has been in business for 45 years, but its number of locations has stalled between 350 and 400 restaurants for the past decade. Linville, a former senior vice president with Arby’s, joined the company about two-and-a-half years ago to spark an expansion. Taco John’s is adding 13 new restaurants by the end of this year, bringing the total number of locations to 395, and expects to open another 20 to 25 sites in 2016.

Taco John’s is seeking franchisee partners who want to help the company expand its brand across the country. The company’s ideal partner is highly capitalized, operates other restaurant franchises and is willing to build out a market with five to 20 Taco John’s locations. That high level of commitment requires some freedom, Linville says. Larger franchisees tend to want control over the marketing and pricing in their market, which Taco John’s readily provides.

Some of the new restaurants will be in large markets such as New York City and Indianapolis where Taco John’s does not currently have a presence. In entering those territories, the company must educate consumers about what Taco John’s is and what it can offer. “It’s an opportunity for us,” Linville says. “We get to define our future brand today in new markets.”

Brand Overhaul
In 2014, more than 200 stores – half of Taco John’s locations – were up for franchise renewals. Such uncertainty could have been a reason for concern, but Taco John’s took it as an opportunity to rethink the look of its restaurants. As part of the renewal agreements, the company set new standards for store designs. Locations could choose from two options. The “velocity restaurant” is a counter service design with seating for eight customers and a footprint of a half-acre. The “signature stores,” on the other hand, are the larger concepts that employ steel and glass to create a modern look aimed at attracting millennial customers. Linville says three signature stores are already open, with 13 more expected to open by the end of the year.

Linville hopes the new image for Taco John’s and its roadmap for the future will enable the restaurant chain to adapt to a market that is quickly moving away from low-cost fast food. “Through our rebranding, one of the things we discovered quickly is our average guest needed to change,” Linville says. Studies showed that customers lumped Taco John’s in with quick-serve competitors such as Taco Bell, Del Taco, McDonald’s and Burger King.While looking at the desirable millennial market, Taco John’s realized it needed to clearly define what its brand was and what market space it wanted to fill. To grow, the restaurant became an innovator, Linville says. The company sought higher-quality ingredients and built a new menu from scratch. “Where we want to live is the very top of the Mexican quick-serve [market],” Linville adds.

To develop those premium tasting flavors and products, Taco John’s culinary teams go on taco tours of Mexican food hotspots such as Austin, Texas and Mexico City. The culinary groups then take what they learn from those trips and work with industry chefs and Taco John’s vendors to get a feel of where the market is heading and what the next breakout food item will be. “A lot of quick-serves would never touch this stuff, but it’s really where we want to go,” Linville says of the initiatives.

The introduction of high-quality, limited-time products such as street tacos and walking tacos has put Taco John’s on pace to improve sales 7.5 percent to 8 percent in 2015. But those short-term gains are being made with the long term in mind. Linville and his team are already developing the restaurant’s 2020 menu. The limited-time items Taco John’s offers in 2015 through 2017 are serving as tests for the future lineup. “We’re allowing our guests to design our menu for us,” Linville says.

Through its rebranding studies, one of the things Taco John’s has learned about the millennial generation is that their tastes and what they consider to be fresh food is changing rapidly. A few years ago, the conversation around healthy eating was all about free-range livestock. Now, talk has shifted to genetically modified foods. By the time the calendar flips to 2020, that conversation could change again. “I think that these generations are trying to figure out exactly what healthy is going to be, what exactly fresh is going to be. So I don’t think you want to go too far out in your projections,” Linville says. What may not be relevant today could be a hot item three years from now, he adds. “So let’s not use the old formula to decide our menu. Let’s let the millennial guest decide.”