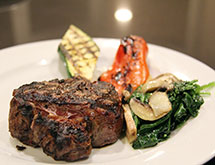 Tapia Brothers Co. has grown over the years, but it has never lost its family business feel, Vice President Erik Tapia says. “We have close contact with our customers and we feel like our employees are an extension of our family,” he says.

“My father, Raul, and my uncle Ramon started up with him,” the younger Tapia explains. “They started out of a produce truck and did door-to-door selling.”

Eventually, the company grew and started distributing groceries as part of its business.

“We’re a full-line broadliner,” Erik Tapia says, noting that the company employs a staff of nearly 300 and is on pace to hit $250 million in sales this year.

Tapia Brothers largely serves Hispanic restaurants and has a loyal customer base with much repeat business. “It’s almost [unheard of] for a customer to start with us and stop purchasing,” Tapia explains. “We really don’t have any turnover in our customer base.”

Small Yet Strong
Tapia Brothers sits in a niche category in its market, Tapia says. Many of its competitors have consolidated, “so there’s not many family owned broadliners like us around,” he says. “I see a lot of customers jumping ship from the big publicly traded companies and looking our way with everything we have to offer.

“We’re not half the size of what these guys are,” he admits. “But we add value with the service and the personal touch they can get from us.”

Tapia Brothers continues to add value and grow, he adds. For example, “We’ve been examining different types of ethnic cuisines,” he says. “Even though our bread and butter is Mexican restaurants, our product mix allows us to do different cuisines.”

Consumers, he adds, are starting to find Mexican dishes in different cuisines and restaurants that were non-existent a decade ago. “Mexican food has become mainstream,” Tapia says. “This cuisine is so highly commodity driven it has allowed us to carry over and sell to many other types of restaurants.”

The company also has launched its Kitchen Cuts business with a new website, www.kitchen-cuts.com. “We’re specializing in portioning proteins and offering added-value brands, like our Tristar [Angus beef] and Chloe’s antibiotic-free chicken,” he says.

Tapia Brothers also has invested in its supply chain. “We introduced Cheetah, which is a logistics software that tracks all of our routing, navigates the roads, sends messages to the driver and lets the customer know when the driver’s going to be arriving,” he says.

A Good Problem
Tapia Brothers is coping with the challenge of growing while trying to attract quality personnel to join its family and maintain the same level of customer service while expanding, Tapia says. “It’s a good problem to have,” he says. “We’re growing every day.”

The company is coping by expanding its staff. “Every day, we’re trying to source more personnel,” he says. “Our biggest struggle is getting more warehouse personnel and sales representatives to knock on doors and help us expand.”

When recruiting, Tapia Brothers looks for “a team member that puts priority in service and is a problem solver,” he says. “Someone who values family as a direct representation of our company core principles.

“The interaction its managers have with employees is quite important,” he continues. “We want our employees to grow with us. With growth comes many positions to be filled. We give all our employees a chance to grow and expand into different departments and positions. We all take great pride in this company.”

Tapia notes that he shares this passion for the business.

“I still love this industry for the fact that it’s all about relationships,” he says. “It’s old school in a sense, where the relationship and service are more valuable than being the cheapest company.

“Everyone in the industry can beat each other up on price but it takes a great company to have a customer’s best interest by providing quality products and a workforce doing everything to make your business more efficient and profitable,” he states.

Success Story
Tapia Brothers’ family environment has numerous benefits, including the fact that it works together to resolve problems and put any differences aside to come to a decision that will benefit not only the company but its customers as well.

Tapia praises his uncles and father for their leadership. Although the three usually avoid the spotlight they deserve to be in the forefront. “It’s amazing what they have accomplished and how big of an influence they have been on the industry,” he says. “They are great role models and people that I idolize to be.”

Tapia and his brother, Vice President of Operations Raul Tapia Jr., see their work as a great example of people achieving the American dream. “My father and uncles only had a grade school education,” Erik Tapia says. “Now they have a company that’s doing close to a quarter-of-a-billion dollars in sales.”

He sees a strong future for Tapia Brothers. “We are having our reputable name out there and expanding to different cuisines,” he says. “We are picking up new accounts that have nothing to do with Mexican restaurants and doing it well. There are huge differences between us and our competitors. We are one of the few companies that is family owned and operated. Our customers are not numbers to us. We care and are there at a moment’s notice to put out the flame when you urgently need help and run out of product.”