Back to Profile Gallery > The Abalone Farm 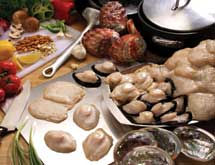 Like a canary in a coal mine, red abalone is often used as an indicator of water quality because of its sensitivity to impurities. Canaries, however, aren’t known for being good eats, and raising red abalone for food requires a lot of care and sensitivity to their optimal conditions. Since 1968, The Abalone Farm in Cayucos, Calif., has been raising red abalone by meticulously recreating the best conditions for them in nature.

“Abalone is a very sensitive creature to grow, and there are no shortcuts,” Vice President of Sales Brad Buckley says. “We mimic their natural environments in their tanks as much as possible, and by doing so our farm has taken the approach a little bit differently.”

Founded by Dr. John Alexander, a researcher and abalone lover, The Abalone Farm was established originally to supply a local need for the flavorful shellfish. Today, however, the farm’s abalone is shipped across the country and occasionally overseas. “The popularity of abalone in the United States has spread, so now most of our product stays in the U.S.,” Buckley says.

Although farms overseas can dwarf the amount of abalone raised in Cayucos, Buckley says seafood lovers with discerning palates prefer those raised at The Abalone Farm because of the care it puts into the work. In other parts of the world, he explains, farms use a lot of mechanization and industrialization to produce large quantities of abalone, but this has an adverse effect on their flavor.

The main innovation Alexander brought to the farm was growing the abalone in open tanks without covers. This opens them up to sunlight and fosters the growth of the algae abalone feed on in the wild. The main reason why other farms around the world don’t do this is for aesthetic purposes, Buckley says. “We feel we’re different from other farms because a lot of the other farms grow them in covered tanks, and the reason they do that is to keep the outside of the shells clean,” he says.

Because abalone is known for their colorful shells and mother of pearl almost as much as for their taste, other farms try to have it both ways. The Abalone Farm, on the other hand, is only concerned with raising the best-tasting abalone it can, and Buckley says chefs can tell the difference. Because abalone in open tanks get more variety in their diet, they taste more like the abalone caught in the wild. That’s a very important distinction for The Abalone Farm to be able to make, because commercial diving for wild abalone was ended in 1997 and has not been reopened since, Buckley says.

Raising abalone of superior quality is what helps The Abalone Farm stand out against its competitors, Buckley says, and there are a lot of them. “The biggest challenge is the importation of farm-raised abalone from other parts of the world,” he says.

Not only can abalone be imported from South Africa, New Zealand and Chile, but many different species can come from those places, as well. All of this complicates matters because much of the general seafood-eating public is relatively unaware of abalone, and most seafood restaurants don’t distinguish between different varieties on their menus. “It’d be like just ordering ‘fish’ at a restaurant,” Buckley says. “Well, what kind of fish?”

Although abalone has been a regional staple in some parts of the country for generations, it missed the boat – so to speak – when mass marketing of seafood in the United States hit its stride because wild abalone was mostly exported to Asia back then. Buckley says this makes The Abalone Farm’s mission as much educational as it is culinary. “It has to do with the educational outreach to the public and to the chefs,” Buckley says.