Back to Profile Gallery > The Butcher Shoppe 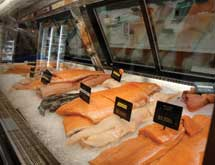 Lately, it seems the trend in the grocery business has been to limit the interaction customers have with their grocers. They can bag their own groceries, use self-service registers to ring up their orders themselves and place orders on the Internet to be delivered right to their doors.

Located in Chambersburg, Pa., The Butcher Shoppe has not embraced these trends. In fact, the fresh food market takes the exact opposite approach, according to Vice President of Marketing Adam Keath.

“Customer service is big,” he says. “There’s not a whole lot you can do in our establishment without interacting with our staff.”

That attitude has a lot to do with the store’s family roots. Its history began with a market started by Keath’s grandfather, Glenn Koons, in 1957. After buying full ownership of the market from his partner with his wife, Lorraine, Koons incorporated in 1968 and opened a second location in 1977. It is this second store that is the home of The Butcher Shoppe today, and in 2006, the Koons’ daughter, Mary Sue, and her husband, Frank Keath, purchased the company.

The other factor that drives The Butcher Shoppe’s philosophy is the community it serves. Even though Chamber­sburg is less than two hours away from Baltimore and Washington, D.C., and is a sizable city with a diverse population in its own right, Keath says the community maintains a small-town feel.

Keath says the company has a long history of community involvement, providing a standing discount to churches and nonprofit groups as well as donating products. “We have a history of being approachable in that area, so we get a lot of requests from churches, sports teams and local organizations,” he says.

The Butcher Shoppe competes with a number of regional supermarket chains as well as Walmart and Target, so Keath says going the extra mile for customers is one way it distinguishes itself. However, that’s not the only thing The Butcher Shoppe has going for it.

All the customer service in the world won’t keep customers coming back if the product isn’t good, and Keath says The Butcher Shoppe emphasizes the quality of its products as much as the interaction it has with its customers. Its meat department always has butchers on duty during store hours, and little is prepackaged. The store sources all of its meat as primal cuts, meaning meat is cut just before customers walk out of the store with it and nothing is left over. “What we have to sell is only what we need,” Keath says.

The Butcher Shoppe guarantees the same level of quality and freshness in its deli, bakery and seafood departments, as well. It sources as much of its produce locally as possible and what it can’t find locally it ships quickly.

The reputation of The Butcher Shoppe is as important as ever as the Chambersburg area weathers the recession. Keath says business in town has stalled somewhat since boom years in 2005 and 2006, and the strong relationship the store has with its customers has done a lot to help keep it afloat.

In the long run, Keath says one of the store’s chief concerns is maintaining the same level of investment in future generations of leadership. As a family business, he says, The Butcher Shoppe cannot be run as a “cookie-cutter” operation and requires special attention. “In our case, there is nothing else like us, so there has to be a lot of personal investment from an employee to get to know how this business is run,” he says.

The store continues to enhance its reputation for customer service, most recently in the form of a 19,000-square-foot expansion that should be completed before Thanksgiving. Keath says the goal is to give the store more space for staples such as cereals and other packaged foods to make The Butcher Shoppe a “one-stop food shop” for customers to do all their grocery shopping. About 3,000 square feet of the expansion will be used for customer service areas, and the rest will go toward expanding prep space.