Back to Profile Gallery > The Cheese Steak Shop 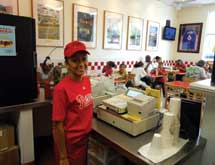 Not many cheese steak shops outside of Philadelphia can say they serve an authentic cheese steak sandwich, but the Cheese Steak Franchise Corp. of Hercules, Calif., does. President Steve Oakes and his partner, founder Keith Layton, were born and raised in the Philadelphia area, so they know a good cheese steak when they see one. “We get a lot of comments about the fact that we’re the best in the West,” Oakes says.

When Layton – a chef by trade – relocated to San Francisco, he missed cheese steak sandwiches so much he decided to open his own restaurant in 1982. The Cheese Steak Shop was an instant success. Native Philadelphians in the Bay Area were grateful to have a restaurant nearby that served authentic cheese steak sandwiches, and the deliciousness of the sandwich turned locals into lifelong fans. “We’re teaching new people every day about what a real cheese steak is supposed to be,” Oakes says.

The Cheese Steak Shop sources its rolls from Amoroso’s Bakery in Philadelphia. “We have them shipped out by the truckloads,” Oakes says. Its sweet and hot peppers are from Philadelphia, as well as its Tastykakes. “We buy a special meat, a sirloin,” he adds. “It’s from the Midwest, which is probably where the East Coast gets their meat too.”

Similar to Layton, Oakes relocated to the West Coast to work in the restaurant industry. Initially, he directed franchise operations for a successful pizza eatery. “Because I’m from Philly and a cheese steak lover, I kept going to Keith’s stores,” he recalls. “I was always impressed with the fact that he stayed with the authentic ingredients and didn’t try to cheapen the product.”

Twelve years ago, Oakes contacted Layton and suggested they form a franchise company. The Cheese Steak Shop’s first franchisee opened for business in 2003. Today, Layton operates his own nine stores, and Oakes runs the franchise company. The partners operate 30 U.S. stores across California with future plans to expand into Oregon, Washington, Nevada and Arizona.

The company recently opened its first store in the Philippines, which happened by chance. “The franchisee was a student over here and used to visit our stores when she was going to college,” Oakes explains. “She went back to work for her family’s business, but couldn’t get the thought of a cheese steak out of her mind, so she set up a development agreement to open up three stores in the Philippines over the next two years.

“Our franchisees have to maintain the authenticity of the product,” he adds. “She’s going to be using the authentic ingredients, which we will be shipping by container over to the Philippines. We have a slogan in our store, which is ‘CAUTION: May be habit-forming.’ I think that’s what happened to her.”

When customers walk into The Cheese Steak Shop, it’s like they’re stepping inside the City of Brotherly Love itself. The restaurant’s logo is the Liberty Bell. Also adorning the walls are 76ers, Eagles and Phillies banners. “When people come into our stores and bring things from Philadelphia, they get a free sandwich,” Oakes adds.

Akin to a true Philly cheese steak shop, The Cheese Steak Shop features an open kitchen so patrons can watch their sandwich being made exactly as they wish, whether it’s “wit or witout” cheese or peppers. “It’s a fun atmosphere,” Oakes remarks. “Everybody in our stores interacts with the customers. All of our people are trained on running all aspects of the store, so no matter what your job description is, you always interact with the customers.

“Our product stands on its own merits, but it’s important to follow through with good customer service,” he continues. “We always insist that [the employees] welcome the customer. Everybody in the kitchen says hello to you when you walk in the door, and you don’t see that everywhere. When people leave the store, everybody says, ‘Thank you for coming.’ because the most important part of our business is our customers.”