Back to Profile Gallery > The Epicurean Group’s 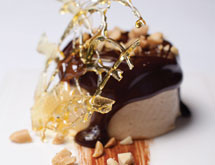 The Epicurean Group’s newest restaurant concept offers diners the finest food and service without the pretentiousness or stuffiness that is often associated with the term “fine dining.”

Gastronomy – A Modern American Bistro, which opened in September 2012 in Southfield, Mich., is the first restaurant entirely designed by the company, which formed in 2010 after the purchase of seven existing restaurants in the metro Detroit area.

“We try to create a warm, welcoming and relaxed ambience typically not associated with the stuffiness of white tablecloth-type restaurants,” President Eric Djordjevic says. “You’ll see people conducting business here in suits as well as ‘urban chic’ people in jeans and T-shirts, all coming together with the common bond of enjoying great food.”

The new restaurant reflects and expands on the Detroit-based company’s goal of “having fun with food” while supporting local and American businesses through its sourcing practices.

“Gastronomy, as the name indicates, is all about celebrating the art and science of good food and good eating, and we wanted to operate differently from what many others are doing,” he adds.

Everything in the restaurant is made from scratch. This is a somewhat daunting proposition when considering Gastronomy seats a few hundred people as opposed to many from-scratch kitchens, which are much smaller in size, Djordjevic notes.

Executive Chef Adam Hightower and his brigade use ingredients produced either in Michigan or in the United States. Even items that are typically sourced internationally – such as coffee, tea and soy sauce – come from domestic producers including the Charleston Tea Plantation in Charleston, S.C., and Pure Kona Coffee from Hawaii.

The restaurant’s beer and wine list consists of only American craft beers and wines. Wine selections include varietals from not only well-known wine production states such as California but also places such as Texas, New Mexico and Traverse City, Mich.

“Our entire team embraced a philosophy of giving back and supporting the local and American economies,” Djordjevic says. “Instead of shopping just for the lowest bidders, we chose suppliers that kept in line with that philosophy.”

Gastronomy’s community-oriented approach extends to the restaurant’s décor. A gallery of black-and-white photos with the theme of “giving back” is on display in the restaurant, with each of the photos for sales. Proceeds benefit a charity of the artist’s choice, he adds.

Future plans related to the restaurant include developing an “urban farm” in Detroit that, if approved by the city, would be used as a source for produce, Epicurean Group CEO Stan Dickson says.

In addition to its restaurant operations, Epicurean Group offers catering to corporate and social clients. The company is the only caterer in the Detroit area which has Kosher facilities that offer Glatt meat and Cholov Yisroel dairy, Dickson says.

The company’s restaurants have garnered a number of awards and honors including “Best in Michigan” nods from local magazines, high Zagat ratings and recognition from Wine Spectator magazine.

Djordjevic and Dickson attribute the restaurants’ success and recognition to the company’s emphasis on internal recruitment and staff education and development. The company’s recruitment efforts are led by Chief Talent Officer Doug Balchan.

“We’re working on always improving our infrastructure,” Dickson adds. “We’re constantly talking to other restaurants in our areas that need better management and keeping our ear to the ground for good opportunities.

“We’re well-financed, poised for growth and looking forward to a bright future,” he says.