Back to Profile Gallery > The Fish Market 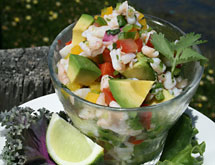 Even with more than 50 years of experience as a fishmonger, Aiden Coburn says he still learns something new about the industry every day. In fact, the director of quality control for The Fish Market – a California-based casual seafood dining chain – says he has to stay abreast of countless changes in the seafood business, ranging from government regulation to ever-shifting consumer trends to pricing in a recession.

“I began my apprenticeship 51 years ago, and I am still learning,” says Coburn, who moved to California from Dublin, Ireland, and joined The Fish Market in 1983.

The Fish Market’s first location opened its doors in 1976 in Palo Alto, Calif., but partners Bob Wilson and Fred Duckett were hardly restaurateurs in those days. Duckett was an avid sport fisherman with his own vessel in San Diego, and he approached his partner Wilson – and a gourmet chef – about possibly opening their own restaurant.

Combining their passion for seafood with a knowledgeable and attentive work force has led to 35 years of success in the competitive restaurant industry. The Fish Market has six locations in California, with the largest restaurant a 24,000-square-foot eatery in San Diego.

Consumers continue to demand transparency about the source of their food, whether it is to ensure humane treatment of animals or organic practices in raising livestock. The seafood industry is no different, and Coburn says The Fish Market takes great strides to ensure its seafood comes from sources with integrity and a focus on future sustainability of the fishery resource.

It refuses to carry numerous endangered species, including the Chilean sea bass, orange ruffy and the Atlantic swordfish. Also, The Fish Market only sells shark caught incidentally. “These are species that need everybody’s help,” Coburn says. “In the partnership between fishermen and the general public, the glue is the restaurateur.”

The Fish Market sources its inventory from countries that have fishery management programs in place. Coburn himself is an advocate for consumer education, and he speaks to trade associations, consumer science groups and chambers of commerce. In 1988, Coburn and The Fish Market founded a marine outreach program for schools that continues today.

“It’s all about two things – preservation and conservation,” Coburn says. “You don’t fish too hard, and you don’t fish with the wrong equipment so the resource can restock itself. Fisherman and fishery managers don’t always get along, but they agree that without conservation, they won’t have a future.”

Profitability in a Recession

There might be a recession that is keeping diners at home, but The Fish Market hasn’t fell victim to it yet. Coburn says while the restaurant saw a decrease in guest counts at its locations between 2008 and 2009, a new set of promotions increased those numbers in the first half of 2010 and continues to improve. These include “Early Catch” specials between 3 and 6:30 p.m. Monday through Thursday, which have a menu of two-course dinners for $12.

“Parking lots for restaurants at 5 o’clock on a Monday usually don’t fill up,” Coburn says. “But people come here for creative menus that change every four or five weeks.”

The Fish Market maintains the bottom line with these specials by focusing on species of fish that have otherwise been overlooked by its competition. For instance, although tilapia may be the fifth most popular fish in the United States, The Fish Market adds Dijon mustard, panko Japanese breading and salsa. “We have five different varieties, so we change it up,” he says. “The flavor of this one brings tears to a glass eye. There are a lot of young professionals trying to stretch their budget.”

The Fish Market also appeals to consumers seeking healthy dining options. Coburn says the restaurant plans to go beyond providing these meals to teaching the general public about the benefits of seafood in their diets.

“Our vision of the future is to hopefully keep educating the younger generation about how seafood lowers their cholesterol,” he adds.