Back to Profile Gallery > The Grand Central Oyster Bar and Restaurant 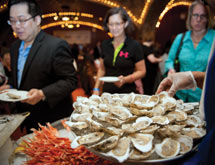 The Grand Central Oyster Bar and Restaurant is as old as Grand Central Terminal in New York, where it has been a culinary and tourist destination since it opened in 1913. Ironically, its restoration after a fire coincided with the terminal’s much-heralded restoration in 1997.

On April 19, the 500-seat restaurant celebrated its 100th anniversary with approximately 250 of its most enthusiastic customers, one of whom – Noel Mangan – had the honor of slurping down the restaurant’s 100 millionth oyster served. That’s a lot of oysters for a single location to have dished out, even over 100 years.

“When we finished our renovation in 1997, Grand Central Terminal finished their renovation,” recalls Sandy Ingber, executive chef and part-owner. “They reopened this beautiful terminal – probably one of the most beautiful train stations in the world – to a tremendous amount of hoopla, and it became a tremendous destination spot, and still is 16 years later.”

New Cookbook
Among other milestones achieved by the Grand Central Oyster Bar and Restaurant this year is a cookbook by Ingber and Roy Finamore, a cookbook author. The book includes more than 100 of the restaurant’s classic recipes – some of which date back to its opening – and paired them with behind-the-scenes stories, historical anecdotes and information on preparing seafood.

“It’s about mostly classic and current recipes that we use at the restaurant, and a few of my own personal recipes that we use for specials,” Ingber explains. “The book itself was written with the homemaker in mind. All recipes that are like 100 or 200 portions were scaled down to four to six people, which was a real challenge for us. But we tested and retested every recipe.”

Shucking oysters is explained in detail along with eight to 10 pages describing the many different types of oysters the Oyster Bar serves along with filleting fish. “I would really like to thank my two sous chefs, Peter Fu and Juan Lopez,” Ingber stresses. “Both guys are invaluable to me. They were really a big help in writing my book, and basically, I couldn’t do it without the two of them.”

Anniversary All Year Long
During its open-to-the-public anniversary party, the Grand Central Oyster Bar served a seafood buffet with prime rib, ice carvings with an anniversary logo inside and two cakes.

During its anniversary year, the Grand Central Oyster Bar is featuring a daily special costing $20.13, along with offering commemorative key chains and t-shirts. The Oyster Bar also is serving a special wine for its centenary named “Grand Central Oyster Bar 100 Years Chardonnay 2012” from Paumanok Vineyards, Long Island, N.Y. “It’s selling like crazy,” Ingber reports. “We can’t keep it in the house.”

Once the anniversary party was over, the restaurant embarked on a cleaning of the Rafael Guastavino tiles that cover its arched ceilings. Marlene Brody, the widow of the man who reopened the Oyster Bar in 1974, Jerome Brody, reported that before the 1974 reopening, the tiles were black with grime.

After being thoroughly cleaned for the 1974 reopening, the tiles were damaged again in the 1997 fire, and many were replaced. “We had a fire in the restaurant in 1997 that gutted three-fourths of the restaurant and the ceiling,” Ingber remembers. “About 75 to 80 percent of the original ceiling had to be replaced because of this fire. It was really a massive restoration.”

Part of the difficulty of the restoration was matching the original tile. “It’s similar to a terra cotta, but it’s actually three different colors,” Ingber notes. “We are a landmark restaurant, so to restore the restaurant to its landmark status was a big challenge. The ceiling itself took a few months to match the colors, and then a year to install the tile. But for the fire itself, we only closed for two weeks. We have a separate small bar and grill we call the saloon. We opened that while the rest of the restaurant was under construction. That construction took four months, and then we reopened.”

Tile Cleaning
Last May and June, the first of three phases of tile cleaning was completed in the dining room. “We made up the seating in other parts of the restaurant, and we did very well,” Ingber declares. “We were only down a little bit in business over that period, considering that we lost 250 seats, which is amazing.”

The second phase was to close three out of four counters and part of the oyster bar for six weeks during July and part of August – the slowest period of the year – while the tiles over them were being cleaned. “We didn’t lose any business,” Ingber says. Sixty out of approximately 80 seats at the U- shaped, luncheonette-style counter were closed, but the Oyster Bar made up for it in different parts of the restaurant.

The final phase will be in the kitchen and requires closing the restaurant during January and February, since no cooking can be done in the kitchen during that process. “It’s usually very slow, as well,” Ingber says. “We welcome it, because we do the bulk of our business during the holiday season. We do 30 percent of our business in the six weeks between Thanksgiving and New Year’s, and we are literally bonkers. It will be a little bit of a break.”

All the effort is positively worth it. “Each and every tile will be tested for the validity and reglued, or replaced and reglued, and then brand-new ivory color mortar put in between,” Ingber says. “So just for example, the dining room has over 5,000 tiles. Only 29 of them had to be replaced. It’s absolutely gorgeous – like a brand-new ceiling. A lot of money was spent to renovate this, and we’re very proud of it.”

Always on Saturday
Among recent changes at the Grand Central Oyster Bar and Restaurant is being open on Saturday. Grand Central Terminal has a food court that is open all week, but the Oyster Bar traditionally never was open on weekends. Ingber goes to the New Fulton Fish Market in the Bronx every day himself to select that day’s fresh catch.

Nevertheless, Grand Central Terminal persisted in its request that the Oyster Bar be open on Saturdays as the rest of the terminal’s food purveyors were. “They also wanted us to open on Sunday, but absolutely not,” Ingber insists. “That is totally against our concept, and we did not open on Sunday. We were very reluctant to open on Saturday, but it turned out to be a really great day.”

Clientele Changes
The clientele of the Grand Central Oyster Bar varies by day of the week and season. “From the moment we opened, we did good on Saturday,” Ingber says. “We have a much different clientele on Saturday. Our clientele during the week is a mix of commuters, businesspeople that are local in the area and tourists. That changes seasonally. In the summertime, there’s less businesspeople and more tourists.”

Ingber and two partners, Janet Poccia and Mohammed Lawal – who started at the Oyster Bar the same year Ingber did, 1990 – own the restaurant. A recent development for the Grand Central Oyster Bar and Restaurant franchising corporation – which Marlene Brody owns – is a new location in Park Slope, Brooklyn, which joins the only other franchise location in the United States at the Newark, N.J., airport. Two additional franchises are located in train stations in Japan.

The Grand Central Oyster Bar’s annual sales growth in Grand Central Terminal is 5 percent, Ingber reports. Another recent improvement is a reorganization of the Oyster Bar’s extensive menu. “We redesigned the way the menu looks and reads as far as categories of the food,” Ingber explains. “I think that has been very positive. The menu itself hasn’t changed, just the categories have changed and made it a little easier to read and more organized. That has been very positive.”

The restaurant also combined its private reserve wine list with its regular list of wine and other spirits and put it on every table. “We’re now moving a lot of our private reserves,” Ingber notes. “We have this huge inventory of wonderful rare wines that people never knew about, but now they’ll know about it. We have a lot of high-rollers who love to spend money, and that is a wonderful way for them to do that.”

For the future, Ingber has other ideas, such as opening on Sunday for brunch without offering fish. “We would offer chowders, smoked fish, fried shellfish and other items within our concept,” he says. “Another idea to boost sales at our takeout window for the restaurant is to offer a cup of soup and a sandwich. We never did that before. It will be priced less than $10, which makes us more competitive with the food court crowd in Grand Central Terminal.”