Back to Profile Gallery > The Greenbrier

The Greenbrier is a world-class resort that exudes class, grace, elegance and sophistication, and its food is just as exquisite. Founded 239 years ago, the resort and dining experience has continued to evolve and become a powerhouse in the hospitality and culinary world, producing some of the greatest chefs in the world.

Executive Chef Bryan Skelding and Pastry Chef Jean-Francois Suteau say their attraction to The Greenbrier is not only because of its history, but also because of the impressive number of executive chefs and well-rounded culinarians around the world it has produced. “There is no other program like The Greenbrier’s apprenticeship program,” Suteau says. “It’s the only one in the country that’s this intense.”

The Greenbrier’s 20 restaurants and lounges offer first-class cuisine, making “every meal at The Greenbrier truly exquisite,” the company says. The Main Dining Room recently celebrated its 100th anniversary of serving meals to guests. The dining room was the resort’s first restaurant and is accented with custom-made chandeliers, stately columns and arched windows for added ambiance. 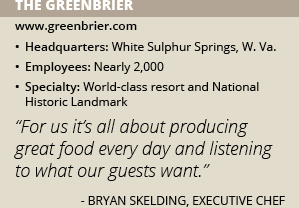 Prime 44 West opened in 2009 and is a classic steakhouse that honors West Virginia native and NBA star Jerry West. Draper’s restaurant pays tribute to Dorothy Draper with traditional Southern dishes. Draper was a pioneer in interior design from 1925 to 1960 and a high-society designer who renovated The Greenbrier after it served as a hospital during World War II. “We are 200 culinarians-strong in full season,” Skelding notes. “Each of our restaurants plans four menus each year so that guests are always sampling something new and exciting. Some of our most popular dishes stay on the menu throughout the year, so that guests have an opportunity to dine on an old favorite every time they come back. There are also seasonal dishes that fit perfectly with a particular season.”

Culinary Masters
Every executive chef and director of food and beverage has brought improvements, changes and their own touches and techniques to The Greenbrier and its culinary team. Chef Ernest Schleusener was the resort’s first executive chef, holding the position for 29 years until 1942. “He was the first to set the standards for the culinary team, and with the help of the railroads was able to bring to The Greenbrier’s guests the freshest ingredients,” the resort says.

Hermann G. Rusch, The Greenbrier’s second executive chef, founded The Greenbrier Culinary Apprentice and Training Program in 1957. The program recently held its 42nd graduation and has more than 300 alumni to date. “It’s like a doctorate degree,” Skelding says. “It’s not a program you come out of high school and jump into. It’s for those who spend years in the culinary field, for example, and really want to hone their skills. We train them in every kitchen and by the time they graduate they know everything there is to know about The Greenbrier and our culinary techniques.”

“It’s not easy to be an apprentice at The Greenbrier; it requires some guts, dedication and stubbornness,” Suteau says. “It may not be the toughest job in the world, but it’s pretty close.”

The Greenbrier Culinary Apprentice and Training Program is an intense, hands-on training curriculum designed to develop and refine the skills necessary to be successful in any establishment in the food and beverage industry. The three-year program teaches through lectures, practicals and hands-on rotations in different venues on the property. “We try to keep one apprentice each year so we’re constantly introducing the best of the best to our kitchens,” Skelding says. “Some stay for a year or two, move on and then come back. I’m on my third tour here at The Breenbrier.”

Severe flooding last June had a profound impact on The Greenbrier from its golf courses to the culinary team’s garden, which it picks from for its farm-to-table events. The resort has kept busy repairing the property and rebuilding three championship golf courses.

“There are always periphery concerns, like revamping kitchens and restaurants, but we make sure our main focus is always on producing great food for every meal and listening to our guests,” Skelding says. “We spend a lot of time listening to guest comments so that we can make sure we’re better every day than we were the day before.”