Back to Profile Gallery > The Ingredient Company 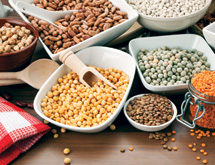 After more than 20 years in the wholesale ingredient industry, The Ingredient Company has a track record of success. The company has been working with companies in various segments of the market in Canada and the United States, and its goals include aligning with current product and consumer trends and offering top-quality food ingredients to the food, pharmaceuticals and nutraceutical industries.

Founded by CEO Al Frittenburg, the company focuses on working with its network of product partners to provide them with solutions. Frittenburg has been in the food business since the 1980s, having worked with some major companies on the industrial side, as well as a distribution company that was sold to McCormick. After deciding to start his own business, he founded The Ingredient Company in 1992.

“When I was in industrial distribution in the late 1980s, the model was to represent as many companies as possible,” Frittenburg says. “I believed in partnering with a limited number of manufacturers and becoming an extension of their overall operations.”

The company is now aligned with a group of products partners that it has strong working relationships with. For example, it works very closely with one of its core product partners, Symrise, as they continually strive to launch innovative flavor solutions that align with current trends. This is evident in their recent launch of Grilled Fruit Flavors.

“Today, all of our product partners are integral to our success,” Frittenburg says.

Market-Driven
The Ingredient Company has established itself by getting involved with products where there was a need in the market and limited competition. Frittenburg’s background was on the savory side of the market, and as the company grew it brought in people with expertise in areas such as beverage, bakery, dairy and nutraceuticals.

“We come in and talk to our customers about their business and ongoing trends,” Frittenburg says. “We talk to people at the c-suite level and in marketing, R&D and purchasing.”

As the company works to improve internally, it has mostly focused on its people. The Ingredient Company believes that, in its role as liaison, it can take information from a manufacturer and carry it into the consumer marketplace. That is why its major expense is getting the right people.

At the same time, the company has made investments to support growth in the past, such as the November 2011 it has purchase of Super Ingredients and its gelatin and Hydrocolloid business. The Ingredient Company also began offering food grade, third-party quality audited warehousing in 2011. In addition, the company ensures its sales force is technically trained and can take advantage of an internal test kitchen where products can be developed and brought to customers in finished product form.

On Trend
One major change happening in Canada due to the financial crisis has been the weakening of the American dollar and the strengthening of the Canadian dollar relative to the U.S. dollar. That change has reduced the ability of Canada’s food manufacturers to export product, much of which had been going into the United States.

“The advantage they had before is gone, and it has been harder for them to compete in the U.S.,” Frittenburg says. “Over the past three years, many multinationals have moved manufacturing out of Canada and into the U.S.”

Although that is a hurdle for The Ingredient Company and its product partners, Frittenburg believes the company has a good roadmap for the future. Part of the strategy is to stay active with industry associations on an international, national and regional level and when possible, execute on strategic growth opportunities.

“Some companies we work with have asked us to help their American operations,” Frittenburg says. “We are evaluating those opportunities and looking to expand our team and our footprint in the U.S. market.”

Another part of the company’s future is providing more consumer, product and market trend insights to customers. Frittenburg says the company must help customers translate overall trends in ways that contribute to successful product development. In addition, the company will continue to collaborate with customers to take full advantage of joint resources, resulting in the successful completion of development objectives.

“We are staying on top of areas that consumers are focusing on such as health and wellness,” Frittenburg says. “In doing so, we are able to work with customers to assist them in developing the kind of products that resonate with consumers.”