Back to Profile Gallery > The Ohio State University 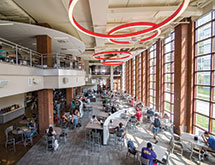 No matter what day of the week it is, the students of The Ohio State University (OSU) have a variety of food to choose from. “On any given day, we have over 100 different sandwiches alone we’re offering to students,” Director of Student Life Dining Services Zia Ahmed says.

Based in Columbus, Ohio, OSU has more than 30 dining operations at its home and regional campus locations. Ahmed notes that the dining services program started nearly 100 years ago and now employs approximately 3,000 employees.

Ahmed himself is a longtime veteran of the campus dining services. Previously, he taught at the college of business at the University of Akron before joining OSU nearly five years ago.

“I’m also very involved in the industry,” he says, noting that he is immediate past president of the National Association of College & University Food Services.

Healthy Eating
University foodservice programs have undergone dramatic changes in the last 15 years, Ahmed says. Not only has the quality of the food improved, but there are now many more healthy options available, he says.

“Over 20 percent of the items we offer are vegan,” he says, adding that another 50 percent can be considered vegetarian. “Our No. 1-selling compound salad is our kale and quinoa salad.”

These efforts have been well received. “Our food and vegetable consumption has gone up well over 40 percent in the last three years,” he says. “We are offering fruit and vegetables in a way that the student enjoys eating.”

He credits this success to a great operating team and Student Life’s corporate chef, Lesa Holford. “They are the ones who are constantly working with our students,” Ahmed says, noting that the university conducts surveys to learn what students want.

“We try to focus on what students enjoy eating with as many healthy options as possible,” he says. “They are always going to buy what they think is tasty and good.”

OSU offers a broad range of foods, but keeping its students satisfied can still be challenging, Ahmed admits. “No matter how much variety you have, it’s not going to ever be enough for students,” he says.

The university has attacked this challenge by offering limited time offer meals every few weeks. “It helps us test our products in a real-life environment,” he says. “Possibly those limited-time offers could be a new menu item down the road.”

Items that were made permanent include its kale and quinoa salad and the London sandwich. The latter features “blackened beef steak and various other ingredients,” he says.

New Additions
OSU is adding to its dining operations, Ahmed says. “This fall, we are opening a nearly 900-seat traditional dining operation that’s going to feature Pan-Asian and Latin American food,” he says. The restaurant, which is part of a new complex of residence halls and dining facilities on campus, will offer gluten-free foods and as well as cuisine that meets allergen requirements.

The university also will open another marketplace-style operation that will feature locations such as a coffee shop with fully traceable products. “We’ve taken our students to Honduras three years in a row to work with the farmers who grow the coffee,” he says, noting that it also may begin expanding the program in Guatemala, Mexico and other countries.

“Our students are interested in food transparency,” Ahmed continues. “They want to know where their food is coming from.”

Learning Experiences
The majority of OSU’s dining program staff consists of students, Ahmed says. However, “We look at our student employments as … student developments,” he states.

“When they come to work for us, they get more than a paycheck,” he states. “They’re there to learn many transferable skills, including leadership, time management, allergen and knife skills training.”

The same goes for the remainder of the employees, Ahmed asserts. “We reward our employees by investing in them so they can become well rounded and a better employee wherever they work,” he states.

Hotbed for Innovation
The dining services program has a special relationship with OSU’s students, Ahmed says. “That’s my proudest accomplishment here,” he declares. “We make them feel like it’s a small, personal connection they have with the university.

“We address every person and take care of him or her individually,” he says. “Every dietary need is different [and] you may require varying levels of service.”

The program plans to continue maintaining those relationships and growing its sourcing of local food, Ahmed says. OSU even has a farm and greenhouse where it sources beef and pork products, and grows the kale for its salads.

“Food tastes better when there’s a story behind it,” he says, adding that it also plans to form more relationships with farmers worldwide. “College dining service is a hotbed for food innovation.”