Back to Profile Gallery > Tofutti 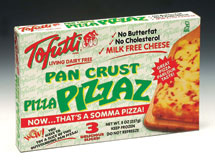 David Mintz explains that many people refer to him as “the Kosher Ham,” due to his tendency to tell jokes and “put the fun back in ice cream” with his dairy-free, soy-based creations. But as the founder and chairman of Tofutti Brands Inc., Mintz often hams it up as the result of his natural excitement about the company’s products and new developments in the dairy-free market.

“I started from zero, but by working hard, Tofutti is sold nationwide and in about 30 foreign countries,” he says. “I’m known to be tenacious, but it’s just because I’m excited about our products. I am working harder than ever before, but it’s not hard work because I love what I do.”

Mintz had been a successful businessman for some time when the Tofutti seed planted itself in his head. A native of Brooklyn, he owned a few kosher delicatessens with catering services in New York City when, in the early 1970s, he wanted to find a non-dairy substitute to use as an ingredient in foods at his stores. He wanted to offer customers items such as beef stroganoff and lasagna, he relates, but those who keep kosher can’t mix meat and dairy.

“Everything I tried tasted just awful,” he recalls.

A couple years later, he read an article about tofu – a soybean curd of Chinese origin that was gaining acceptance in the United States as a cholesterol- and lactose-free dairy substitute. Realizing this may be the ingredient he was looking for, he went straight to Chinatown and “bought a pail” of tofu.

“I was working all the time to use tofu as a dairy substitute in my stores,” he says. “If I got an idea in the middle of the night, I’d immediately get up and go to the kitchen. My first product was a tofu sour cream for beef stroganoff, but that was just the beginning.”

He began experimenting with any product and recipe he could think of, and eventually created tofu pancakes, tofu cheese dips and tofu quiche. Regardless of the recipe, his main requirement always was – and still is – that it taste good. It turned out that tofu was such an effective substitute in many of his products that some customers accused him of violating kosher law. As a result, he started putting up posters to explain, “What is Tofu?”

‘Keep On Trying’
Mintz began gaining a reputation for his tofu creations, and started speaking to local Weight Watchers chapters about the benefits of tofu. His business was going strong, but he was not done creating – he wanted to develop a tofu-based ice cream and other desserts.

Ice cream became “an obsession,” he says, but the process proved far more difficult than he imagined. Either the taste was off, or the texture was wrong. Addi­tion­ally, he couldn’t get consistent results. He talked to food technologists at a local university, but they told him soy-based desserts had been tried before and they couldn’t be done. This adversity was frustrating, he explains, but it pushed him forward.

“It’s been this way from the beginning – if people think something can’t be done, I just keep on trying until I get it right,” Mintz says. “’Keep on trying’ is my motto, and I kept working at it until I had a tofu-based ice cream that didn’t taste like soy and had the smooth texture I wanted.”

In 1979, he perfected his formula for the frozen dessert and started giving samples to customers at his stores. He realized he had to give the new product a name, and settled on Tofutti. “It just popped in my head and I knew it was right,” he says.

Within several years, word of his Tofutti – a non-dairy, kosher parve frozen dessert – spread throughout the kosher community. It also was attractive to non-kosher consumers because it did not contain milk or butterfat, it was cholesterol-free and it was vegan. It also has lower calories than traditional ice cream. Within a year, Mintz realized he could keep Tofutti as a side business of his well-established delicatessen operation, or close the delicatessens and focus solely on Tofutti. He was 50 years old, and decided his future was in Tofutti.

Strict Controls
Based in Cranford, N.J., the Tofutti office has a large R&D lab where Mintz and his employees are continuously work­ing on new products, developing new varieties for established lines or improving an item already on the market.

“We have a state-of-the-art kitchen, and I’m like a mad scientist in there,” Mintz says. “My em­p­loyees help me, and we seem to do the impossible.”

“Our newest ice cream products are Café Latte ice cream on a stick that’s dipped in chocolate, and Black Gold, which is a deep, rich Belgian chocolate > > ice cream bar,” Mintz says. “It puts the Dove bar to shame.”

Tofutti uses the strictest quality-control procedures in its plants to ensure product safety. In addition to the standard testing, cleaning and sterilization processes, Tofutti uses third-party kosher supervisors to ensure its products are dairy-free and free of any animal products.

“We are constantly checking all of the plants we use,” Mintz stresses. “We are strictly kosher parve – the highest standard of kosher – so none of our products have any dairy or nuts. If we ever question the quality of something, we throw it out.“

Taste is Key
Although Mintz loves all of Tofutti’s products, he is most excited about its newest creation – “Better Than Ricotta.” Launching by the end of February, Better Than Ricotta was developed, Mintz says, for the millions of people who are lactose-intolerant. He says this product can be used in meals such as lasagna and ravioli, or desserts like cheesecake or cheese danish, which people who are lactose-intolerant or vegan were not able to eat previously.

“There are so many uses for this product, it’s revolutionary,” he says. “This is our biggest breakthrough since our cream cheese. It looks and tastes authentic, which is true of all of our products – people love them because of their taste. It’s not what we put in the products, it’s what we keep out.”

Going forward, Mintz would like to add pierogis to the Tofutti line – which can be used with its sour cream – as well as cream soups that are dairy-free. He also is working to partner with various chains of pizza restaurants so they will use Tofutti’s dairy-free cheese on their pizza.

“We have a good assortment of products, but good is never good enough,” he says. “A customer wrote me recently to say that she took her son’s baseball team to a pizza place after a game. She ordered a few regular pizzas, but her son is allergic to dairy, so she asked the manager if they would make a pizza with Tofutti cheese – she brought our cheese with her to the place. The manager agreed to do it, and when it came out, all of the kids wanted to try it.

“It’s the great taste of our products that will help this company grow,” he adds. “We are always on the look out for new and exciting opportunities that will help fuel the growth of our company. We have many ideas, and I’m going to see them through.”