As one of the top golf resort destinations in the United States, TPC Sawgrass in Ponte Vedra Beach, Fla., is all about giving its members and guests the most exemplary experience possible. That dedication can be seen in the resort’s two championship courses designed by master architect Pete Dye, one of which is the home of The PGA Tour’s THE PLAYERS Championship.

It also can be found in Nineteen, the resort’s signature restaurant. Senior Director of Food and Beverage Hector Gonzalez says Nineteen offers TPC Sawgrass members and the general public alike a world-class dining experience that could only be found at one of the country’s best golf resort locations. The restaurant’s entire staff is dedicated to maintaining that level of excellence, he adds.

Nineteen is located within chipping distance of the 9th and 18th holes of TPC Sawgrass’ THE PLAYERS Stadium Course, offering panoramic views of the course from its outdoor veranda. The 2,550-square-foot restaurant offers more than just views, however, and its menu boasts a seasonal selection of prime appetizers, salads and entrees, including some of the best locally sourced seafood in the area. All of these offerings are served in an upscale, cozy atmosphere that caters to golfers just coming in from the links or casual diners making a special trip to visit Nineteen on its own. 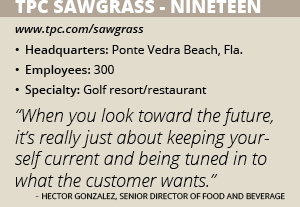 A veteran of the hospitality industry for many years, Gonzalez has been with the TPC network of golf clubs for more than a decade, having previously overseen operations at clubs in Michigan and Sarasota, Fla., before transferring to TPC Sawgrass. He says Nineteen is one of the premier dining experiences in the golfing world, and the restaurant has the awards to prove it. Not only has Nineteen been recognized as one of the best restaurants in the Jacksonville, Fla., area by Jacksonville Magazine for multiple years, but it also has received the “Award of Excellence” from Wine Spectator magazine for several years running.

Magnificent Menu
First and foremost, the experience at Nineteen is built around the menu, which Gonzalez says is tailored to the club’s golfer members but features something for everyone. Whether guests enjoy a sandwich or salad in the afternoon or a steak or seafood at dinnertime, the defining characteristic of Nineteen’s menu is a back-to-basics simplicity that lets them enjoy the high quality of the meat or fish. “We don’t use a lot of ingredients,” Gonzalez says. “We try and let the protein speak for itself, whatever it is. We don’t want to overpower it with a lot of strong flavors.”

The restaurant’s culinary team spends a lot of time working closely with its partners to ensure that Nineteen always finds the highest-quality ingredients and that its recipes are balanced to let the main ingredients shine through. Complementing the menu is the restaurant’s award-winning wine list, which features a carefully selected assortment of Old and New World varietals. Gonzalez says Nineteen’s staff is trained on the wine list and menu pairings weekly so that they always know exactly what’s on the list and what they should recommend to their guests. He says guests also have access to extensive scotch and cigar selections for a relaxing after-dinner experience on the veranda.

Full Experience
Beyond the menu, Gonzalez says everything else about Nineteen is structured to deliver a top-notch but relaxed experience for guests and club members. The overall look of the restaurant has what Gonzalez calls a “clubby” feel, with low lighting and deep leather seats. For guests seeking an even more intimate feel to their time at Nineteen, the Traditions room provides a more elevated experience for up to 50 guests during dinner hours. Of course, guests also have the option to dine in sight of the immaculately kept greens of the 9th and 18th holes on the veranda, and Gonzalez says this is a very popular option when the weather suits it. “The outdoor seating is gorgeous,” he says.

Nineteen matches its upscale atmosphere with service to match the best steakhouses in the country. Gonzalez says the club ensures that its staff receives the best training available to provide the overall best service. He says the restaurant’s comprehensive training program covers everything from removing crumbs from a table to understanding the wine list.

Spreading the Word
Although Nineteen is part of the TPC Sawgrass, it is open to the public as well as club members, and Gonzalez says that creates a challenge in a way because many people assume they won’t be able to get a table without being a member or the guest of a member. He says the club is working hard to spread word-of-mouth through its members that Nineteen is open to everyone.

Membership in TPC Sawgrass continues to grow, as well, and Gonzalez says Nineteen is working hard to ensure that its menu and atmosphere appeal to a larger member population as well as the general public. That means paying close attention to popular trends such as farm-to-table and smaller portion sizes. “When you look toward the future, it’s really just about keeping yourself current and being tuned in to what the customer wants,” Gonzalez says.