Back to Profile Gallery > TraFon Group 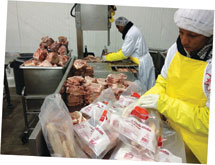 TraFon Group has grown in a relatively short period of time to become the largest distributor of frozen and refrigerated food products in the Caribbean. The Puerto Nuevo, Puerto Rico-based company was formed in 2009 when the Trapaga family acquired Packers Provision, a fresh meat distributor incorporated in 1974.

The family, which owns commercial, manufacturing and real estate businesses on the island, entered the food industry in 2005 with its purchase of Star Meat, a food processor established in 1999. A number of other significant investments and acquisitions followed, culminating in the Packers Provision buyout.

TraFon serves two channels: the retail market, which includes wholesalers, independent grocery stores and chain supermarkets; and the foodservice market, including restaurants, hotels and cafeterias. The company is also the sole distributor on the island approved by the U.S. Defense Department to serve the Armed Forces. “We offer a broad portfolio of products and brands that individually offer different benefits to our customers,” Senior Executive Vice President Javier Pietrantoni says.

The distribution operation carries more than 500 SKUs from a variety of brands including Land O’ Lakes, for which TraFon is the exclusive distributor in Puerto Rico. TraFon operates 250,000 square feet of storage space for frozen, refrigerated and dry products and serves 5,000 customers.

In addition to its two main holdings, TraFon group also owns and operates Caribbean Cold Storage and Logistics, a provider of third-party logistics and warehouse services.

High Standards
TraFon Group continually looks for ways to improve its operations, from adding new products to improving its processing capabilities by adding new packaging and size options. “We are constantly finding ways to delight our customers and satisfy their needs,” Pietrantoni says. “If a customer, for instance, wants a pork chop to be cut in a certain way we will look at improvements we can make to our operations to do that.”

The Star Meat processing operation prides itself on quality and safety, and has a number of processes in place to ensure proper food handling and storage. “We are the only processing plant in Puerto Rico that has never had to shut down as a result of bacteria or other concerns,” Pietrantoni says, noting that its operations exceed USDA standards. “We’ve never had an issue regarding our management of the food safety process.”

In fact, the USDA uses the plant to offer seminars in food safety to representatives of Central and South American countries, an endorsement of the plant’s quality. Pietrantoni attributes the Star Meat processing operation’s success to Senior Vice President of Operations and General Manager Pedro Catoni Prado, a 35-year veteran of the food industry.

Another key to TraFon’s success is La Academia, its academy-style training program that stresses both theoretical and practical skills. “TraFon is focused on recruiting, developing and retaining the best talent pool in the market,” the company says. “We believe that a company is as good as its em¬ployees and every effort of each individual is vital in the collective execution of our company’s mission.”

The program’s objectives are:
• “To promote a flexible offering of [training] courses that respond to the needs and diverse interests of all employees;
• “Promote and stimulate continuous education via different and constant initiatives of education and training of matters that have a substantial and positive impact in the employees’ career path; and
• “Offer services that promote an experience focused on achieving the maximum satisfaction of all participants,” the company adds.

One of the program’s initiatives, “Pro¬yecto Lonchera” (“Lunch Project”), is designed to promote healthy eating from a young age and includes physical activity and nutritional counseling. The project recently launched among the children of company employees, and eventually will be used in a public school. “Our goal is to demonstrate that a nutritive plan implemented at an early age, is a vital component in the life of a child,” he adds.