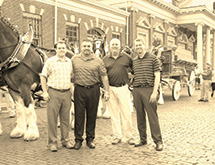 To be a successful distributor, Triple Crown Beverage Group knows it must not only carry the brands its retail customers want, but it must also provide the service convenience stores and gas stations need. “Being that reliable partner for the retailer is critical to long-term success with that retailer,” General Manager Nick Williams says.

Customers can be confident that Triple Crown always has their best interests in mind because Triple Crown is narrowly focused on the beer category. The company will never try to sell its retailers on another product or shoehorn in something its clients don’t want. “I have one singular focus for that retailer: their beer category,” Williams says. “If their category grows, I grow.”

Triple Crown Beverage is comprised of three distributing businesses with a common ownership that came together in 2009 to form one overarching organization. Each of the three companies – Eagle Distributing of Huntington, W. Va., Spriggs Distributing Co. of Ironton, Ohio, and Eagle Distributing of Ashland, Ky. – still maintains their own building and market, but share sales and management services.

The company traces its roots back to 1934 when Spriggs Distributing began operating in Ohio and Kentucky. Spriggs’ territory in Kentucky eventually voted to go dry and founder Guy Spriggs sold the business to his son, Sonny Spriggs. “Sonny was an influential figure in our organization,” Williams says. “He really helped mold the business into a very professional organization for its time.”

The business continued to grow over the next several decades and new generations of the Spriggs family entered the industry and formed their own companies. Triple Crown today is a third-generation business owned by William Guy Spriggs, R. Scott Spriggs and Casey Hill, who started as a warehouse employee at Triple Crown’s Kentucky location and now runs the company’s day-to-day operations.

The name itself is inspired by the three companies and three states that make up Triple Crown, but is also a reference to its most important supplier, Anheuser-Busch and the crown logo that represents Budweiser. The relationship between the two companies grew even closer in 2013 when Triple Crown acquired Mingo Bottling Co., an Anheuser-Busch distributor in West Virginia. The purchase, along with winning the coveted “Ambassador of Excellence” designation from Anheuser-Busch, solidified Triple Crown’s status as one of the beer maker’s top-performing wholesalers in the entire country and increased the company’s market to 15 counties across three states.

Triple Crown’s ability to adapt to ongoing changes in the beer market, support its growth and create synergies between its now four distributor operations has made Hill proud of the company. “Without my people I’m nothing,” the co-owner says. “I can’t make the decisions I make without my great staff.”

Crafty Consolidation
The three business that make up Triple Crown had all been involved in various parts of the beverage industry in the past, including distributing wine, water and energy drinks such as Monster Energy. But as part of the consolidation, the newly formed Triple Crown committed itself to only beer and cider products.

“Our philosophy was we can be good at beer, good at wine and good at energy drinks, or we can be great at beer,” Williams says.
In choosing where to consolidate its operations, Triple Crown chose Eagle Distributing’s West Virginia headquarters. It was the largest facility and allowed the company to put all of its managers under one roof to streamline the decision-making process, Hill explains.

Although Anheuser-Busch remains Triple Crown’s largest partner, the company works with several other major brewers, including Yuengling, New Belgium and Sierra Nevada Brewing Co., along with a number of local and regional craft brands within a 200-mile radius of its market. “Partnering with those regional craft brewers has helped us grow our portfolio in a smart way,” Williams says.

But with the craft beer wave rising over the past decade, the number of small breweries continues to grow. To weed out the viability of those new suppliers, Triple Crown is focused on local craft breweries with long-term potential. “We’re looking for somebody who has great liquid and has proven they can sustain themselves in the marketplace for a period of time,” Williams says.

Although craft brewing is on the rise nationwide, it only makes up about 3 percent of Triple Crown’s sales. Williams says the company’s territory – West Virginia, southern Ohio and eastern Kentucky – is about five years behind the craft movement. “In our market, it’s definitely a small portion of our total business, but it’s a growing portion of our total business,” he adds.

Building Relationships
Even though craft beers make up only a small part of Triple Crown’s sales, offering those niche products is a key component in how the distributor appeals to its retailers. The company supplies beer to about 700 convenience stores, grocers, and on-premise and package liquor dealers across Ohio, Kentucky and West Virginia. To deliver those products across a three-state region, Triple Crown maintains its own truck fleet in each state and runs between 17 and 20 routes every day. A shipment ordered today can be delivered by tomorrow, Williams says.
Service and collaboration are also how Triple Crown strives to differentiate itself from other distributors. The company works with its retailers and suppliers to identify transparent, shared goals and come up with a strategy to achieve success. “Having a 10-year brand building plan with your brewing partners is just essential to business,” Williams says.

Triple Crown also shares its vision with its communities. More than 60 percent of the company’s workers volunteer for various types of community services. The William Guy Spriggs Charitable Trust has provided scholarships for underprivileged children and funding for poverty organizations, food banks and homeless shelters.

Triple Crown sells a socially sensitive product and Williams says the company understands it has a responsibility to its communities. “The civic mindedness is something that was instilled in us by the Spriggs family and Casey Hill,” Williams says.