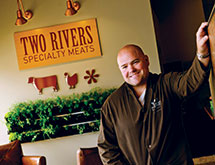 The old joke is that no one wants to see how sausage or legislation are made, but if the sausage is being made by Two Rivers Specialty Meats, close inspection can be rewarding. The company supplies a wide variety of natural meat products that are free of antibiotics, hormones and chemical feed additives, and obtains most of its meat from its home province of British Columbia.

“Our dominant customer would be the restaurant and hotel – from burger joints to super high-end wineries and resorts – and a lesser amount into retail via grocery stores and butcher shops,” Owner Jason Pleym declares. The company’s products include beef, chicken, pork, lamb, duck, turkey, farm-raised game birds and game meats, such as bison and elk. Two Rivers also makes its own line of hand-crafted sausages and charcuterie and provides organic beef and chicken.

“The majority of the organic products would get sold into grocery stores and butcher shops,” Pleym maintains. “Not a lot of restaurants have been using organic products at this point. I think that’s very much a price-driven thing.”

Two Rivers Specialty Meats distributes its products only in British Columbia, where most of its producers are located, although a few are in Alberta. “A lot of them are within 100 miles of our shop in North Vancouver,” Pleym says. The company sells its products on its website, but that amounts to only a small portion of its business.

Pleym hesitates to say Two Rivers serves only high-end products. “That market is very small,” he asserts. “We have the ability to touch all markets depending on what the market is interested in, from a hamburger or a braised shank to an expensive tenderloin. We’re always actively looking for new customers, but it’s certainly more important for us to maintain and service our existing customers.”

Element of Trust
Pleym thinks Two Rivers’ most important advantage is the community it brings to the dinner table. A restaurant might list Two Rivers on its menu as the source of its meat in the description of a particular dish. “It is all about the story of the product and where it came from,” Pleym maintains. “There’s an element of trust between us and what we do and our customer, and what they get and what they expect.”

Pleym and his wife, Margot, founded Two Rivers Specialty Meats in 2007 with her father, who raises beef in Pemberton, British Columbia. “My background was in sales and selling meat,” Pleym recalls. “We started working with my father-in-law and Pemberton Meadows Natural Beef, and I immediately started learning how to butcher. It certainly gave us the knowledge of where we needed to go, learning the details and looking at a carcass differently than we ever have.”

The family owned and managed company’s staff has since grown, and employees with a host of different skillsets are working for Two Rivers, from butchers and chefs to the people who make the company’s sausage and charcuterie in its 5,000-square-foot plant at its headquarters in North Vancouver, British Columbia.

Most of Two Rivers’ meats are provided fresh, but the company also can provide frozen products. The company ages beef from 21 days up to 90 days for dry aging prime cuts in its cooler at 2 C. Two Rivers develops its own recipes for meat products, including exotic ones such as lamb Moroccan style, chorizos and bratwurst.

“As far as expanding our product line, it’s not like the world is inventing new proteins,” he concedes. “All we can do is enhance and add value to what we have and continue to look for more and interesting farms and proteins. B.C. has much to offer, and we are always looking for the best.”

Price Challenges
Pleym cites a major challenge affecting the food industry. “There’s some changes happening in the industry in terms of pricing and food costs, which are starting to rise,” he says. “There’s a bunch of different factors, supply and demand being the most obvious. It’s high time that farmers are starting to get paid for work, and the industry and the consumer must come to terms with that.”

He is grateful for the enthusiasm of his employees. “Our staff is really incredible,” Pleym says. “We’ve got a really great team of passionate individuals who are interested in the success of the company and the growth and the opportunity. So that’s been something that’s been really great that we’ve been really fortunate to have.”