Back to Profile Gallery > UltraStar Cinemas 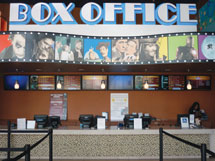 UltraStar Cinemas offers more than a night at the movies. The Vista, Calif.-based theater chain strives to give its moviegoers a full entertainment experience complete with exemplary customer service and, in particular, high-quality food.

UltraLuxe theaters feature full kitchens and sit-down cafeterias as well as beer and wine service. Patrons can order food and drinks directly inside of their theater using a call button, and be served at their seats.

“These theaters really stand out, so we want them to offer food items that are more unique,” Stengel adds. “We’re always trying to add new offerings and things you wouldn’t normally get in a movie theater.” UltraStar is developing new menu items including salmon wraps, paninis and salads; buffalo burgers; and gelato. All food is prepared fresh in-house.

In addition to offering menu variety, the company also puts its own twist on theater concession standards. “We believe in continually keeping our menu fresh and appealing,” Stengel says, noting that UltraStar makes its own dressing and sauces in-house. “We’re always either seeking new items or finding ways to make old items fresh. Everyone has a burger or a grilled cheese, but we’re always looking for ways to make what we offer different from everybody else.”

The company conducts a two-stage testing process on all new menu items. A blind tasting first takes place in UltraStar’s test kitchen, followed by a similar tasting on a theater site. From there, items are brought to the public for 30 days, with responses gathered and considered before final decisions are made.

An Entertainment Experience
The two UltraLuxe theaters are part of a chain of 13 UltraStar locations in both California and Arizona. In addition to the UltraLuxe theaters and standard first-run theaters, the company also operates Play It Again, a second-run theater in Chula Vista, Calif., with discounted prices and self-service popcorn and soft drinks.

Later this year, UltraStar will open its third UltraLuxe location in Maricopa, Ariz., which will take the company’s luxury theater and entertainment experience even further. The theater complex, set to open in mid-November, will feature 12 screens. Each screen will feature two levels of seating – the bottom portion will be open to all ages, while the top portion, dubbed “StarClass,” will be open to ages 21 and older and feature full bar service as well as in-seat service.

In addition to the 12-screen theater, the complex will also feature a 24-lane bowling alley, a restaurant, a bar, an arcade, a laser tag arena and a rock-climbing wall. Two full kitchens will serve the building.

The Personal Touch
UltraStar’s guests can expect a positive experience their entire time there. “What really distinguishes us is customer service. We believe if you can’t take care of the people walking through the door you will fail, and they won’t come back,” Stengel says.

The company emphasizes training of theater managers, who in turn oversee the development of their employees. All managers and employees are trained to adhere to the “10-person rule,” where every guest in the theater or restaurant has personal contact with an employee a minimum of 10 times.

“It’s important for us to get to know our customers,” Stengel adds, saying the company considers this its true objective. “Connecting on a personal basis with our guests is the single most important thing we can do.”