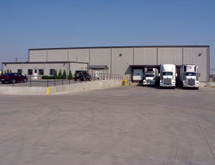 Providing the “personal touch” in its service to customers has always been important to Val’s Distributing Co. The Tulsa, Okla.-based company formed in 1976, shortly after the opening of a large regional grocery distribution center changed the way meat packers in its market interfaced with smaller retailers. This created a service niche Val’s Distributing was more than happy to fill.

Although Val’s Distributing’s product base has greatly broadened in the 37 years since it opened its doors, its commitment to serve retail customers remains the same. “We try to be very user friendly to our customers,” Grabow says. “When you call here, someone always answers the phone.”

Co-owner George Donker says that while the industry and company have changed over the years, Val’s Distributing’s attention to detail and personalized approach to business earns it customer loyalty and repeat business. “Our continued growth and success rests on a foundation of experience, quality products, an esteemed vendor base and superior service to our customers,” he adds.

The company’s sales force is regularly in touch with customers, speaking or meeting multiple times a week to discuss orders or potential issues. Val’s Distributing maintains a 22,000-square-foot warehouse in Tulsa as well as a sales office in Oklahoma City.

“We take a proactive approach to the business and address problems early when they arise,” Donker says. “We’ve found our customers understand that things don’t always go as expected , but they don’t like surprises, and want to be informed as to what’s going on and what we will do to fix it.”

The company takes a similar approach with suppliers. “We like to keep things simple, and don’t like to employ excessive bargaining techniques such as slotting fees,” Donker adds. “We buy at one price, put a fair mark-up on the product and that is our selling price.”

Val’s Distributing serves customers throughout the state of Oklahoma, as well as portions of Kansas, southern Missouri and northwest Arkansas. “We have clients of all shapes and sizes, from mom and pop stores all the way up to Walmart,” Donker says.

Product Variety
Val’s Distributing’s relationships with suppliers and customers have helped it to expand its offerings. “Early on we were just a meat distributor,” Grabow says. “Today we’re represented in nearly every department in the store.”

The company carries commodity meat items such as boxed beef, fresh pork and poultry, as well as cheeses, processed meats, bakery items and seafood. Many of the items the company carries are sourced from local producers as well as national cooperatives including Farmland Foods, National Beef, Dietz & Watson and Frick’s Quality Meats.

Recent additions to the company’s product line include all-natural, antibiotic-free organic products, as well as a line of Hispanic products.

One of Val’s Distributing’s grocery customers recently partnered with the company to develop private label products. “There used to be four grocery wholesalers in the Tulsa area, now there’s none,” Donker adds. “There’s been so much consolidation in our industry that it’s difficult for our customers to differentiate themselves, which is why they’re coming to us to develop something that you wouldn’t find in a large chain or other competitor.”

The company’s addition of new product types has helped grow the business without expanding geographically. Donker sees the organic and Hispanic lines in particular as being contributors to future growth. “Much of our growth is driven by our customers and what their consumers will be demanding in the future,” Donker adds.