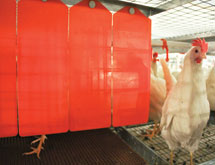 Being free-ranging sounds good if you’re a cowboy with a gun, but if you’re a hen, there are dangers. That is why Vande Bunte Eggs, which is part of Konos Inc., is the first company in Michigan converting its 16 barns of nearly 2 million egg-laying hens to new colony-enriched housing.

“Colony-enriched is a real blend between giving the hens the ability to exhibit their natural behavior and relieving aggression, but also keeping them safe from themselves, from predators and keeping them disease-free,” Vice President of Operations Rob Knecht says. “The hens win because they are in a much better environment, and you as a consumer win because you get a better and safer egg.”

The colony-enriched housing system encloses a group of hens in cages that measure approximately 12 feet by 6 feet and are about 2 feet high. It provides easy access to water and feed, allows the birds to stretch out their wings, use scratching pads and lay eggs in a more private, darker area. At the end of each row of perches is a box with red plastic flaps where the hens lay their eggs, and each hen has a perch on which it can sit.

Free-range chickens frequently are exposed to their own manure, which can breed disease. Knecht cites statistics from a North Carolina State University study conducted by Kenneth Anderson comparing egg-laying methods. “In the free-range or pasture-raised, I’ve seen reports that as high as one out of three chickens die from a variety of different things, whether cannibalism or predators or illness,” Knecht reports. In the traditional caged system, deaths number one out of 20. “In the colony environment, we’ve seen numbers as good as one out of 50,” Knecht maintains.

“There’s a dirt detector, a crack detector, and after they’re rinsed off and sanitized, there’s one final rinse,” Knecht describes. “Then they go into this machine that weighs them individually. This machine sorts them into the lines that are being packaged – small, medium, large, extra large and jumbo. The different weights will go to the appropriate conveyors that are packing those eggs. That is highly automated.”

The eggs then are packed in pulp, Styrofoam or plastic containers and placed in cardboard boxes that are stored in the plant’s cooler, which makes up more than half the processing plant. They are shipped by truck to retailers, foodservice and commercial accounts throughout the United States and internationally, even to China, the Maldives Islands and Japan. Vande Bunte only sells eggs in the shell and only brown or white, not organic or enriched with vitamins or minerals. But the colony-enriched eggs will be labeled as such and sold for a small premium.