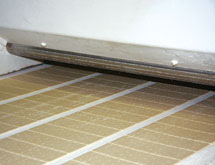 These principles still drive the Hingham, Mass.-based company’s operations more than 80 years after Barmakian baked and packaged the company’s first 100 percent whole-wheat wafer. While the company’s product line has increased dramatically since its founding, all-natural products remain at its heart.

“The crackers and flatbreads we make are simple recipes,” President and CEO Michael Thompson says. “The way we do things is a throwback to the way they were done before 1930. Our basic ingredients haven’t changed very much.”

The company markets crackers and flatbreads under the Haute Cuisine, Venus 8 Grain, Nejaime’s Lavasch, Capeachio’s, Deli-catessen and The Original Mariner Biscuit Company brands as well as breadsticks under the Vita Vigor brand. In addition to selling its own brands, the company also offers private label and co-packing opportunities to major retailers.

“Our brands can be found in independent specialty food retailers and health food stores,” Thompson adds. “We don’t compete against Nabisco or Keebler. We are a natural channel player, and the way larger retailers cover that segment, if at all, is through our private-label program.”

Venus Wafers’ private label manufacturing and packaging capabilities give it a competitive edge. “There are a lot of companies that do artisanal-style crackers, but many of them aren’t large enough to do private label programs,” Thompson says. “If a major retail chain wants a flatbread or a healthier cracker within their range they will probably consider us.”

Approximately 80 percent of Venus Wafers’ products are made in Hingham, with the Capeachio’s and Vita Vigor brands imported. While the company uses traditional recipes, it takes advantage of many modern technologies and equipment in its manufacturing facility.

“There isn’t too much of a difference between our cracker plant and Nabisco’s cracker line, except for a little bit more automation on theirs,” Thompson adds.

A Growing Specialty
Venus Wafers’ products are made using all-natural ingredients such as canola oil in place of soybean oil. Products do not contain hydrogenated oils, high-fructose corn syrup, corn sugar or dextrose.

“The products we make offer consumers a healthier eating experience than a cracker that is drenched in oil,” Thompson says.

Venus Wafers carries a number of certifications including meeting USDA Organic and British Retail Consortium standards. Products are also kosher and vegan certified. In December 2011, the company began working with Project Non-GMO, a non-profit organization committed to offering food options that do not contain genetically modified ingredients. Venus’ Mariner brand was its first to carry the certification.

“We are happily surprised by the acceptance of non-GMO products,” Thompson adds. “That’s really leading us to add new products under that label and grow our branded business.”

Venus Wafers Inc.’s certifications and emphasis on making healthy products give it the ability to reach a growing audience of consumers.

“Americans over the last 30 years are more interested in healthy eating and moving toward no fat or low fat products,” Thompson says. “I think people are choosing different products based on their ingredients.”

The company’s in-house brands account for about 25 percent of its total revenue, a figure Thompson expects to increase as it continues to add to its manufacturing capabilities and build its business internationally.

With more than $59.75 billion in retail sales in 2011, the specialty food market – which encompasses natural and organic foods – is making great strides within the United States, according to the National Association for the Specialty Food Trade. Specialty foods make up roughly 14 percent of all retail food sales.

“The little segment at the end of the grocery shelf is getting bigger,” Thompson adds.