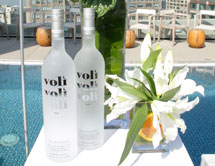 The perfect drink is something that comes with all of the fun and none of the guilt. With mixology on the rise, alcoholic drinks today essentially can become dessert in a glass. If melded together correctly, a cocktail can take on the taste of birthday cake, key lime pie or a chocolate mudslide dessert unfortunately they can take on the calories as well. Even Caribbean classics such as piña coladas and daiquiris are notorious for the pounds they add.

No food or beverage category has been unsusceptible to the health revolution taking root among mainstream consumers. Lifestyle-conscious consumers have decided that they do want their cake and they want to eat it, too – minus the icing. Food and beverage makers have responded to the demand, taking some of the most traditionally unhealthful food and beverages and transforming them into skinny versions of the original.

Diet sodas, low-calorie beers, sugar-free items and reduced-fat chips, cookies and even ice cream pack grocery store aisles alongside their predecessors and are sometimes just as popular. In 2010, the spirits market joined in, with the launch of the world’s first line of low-calorie fruit and fusion flavored vodkas: Voli Spirits.

“In general, every product category over the last 40 years has developed a low calorie alternative,” explains Adam Kamen¬stein, founder, owner and CEO of Voli Spirits. “It started with soda in the 1950s and beer in the 1970s. Now there are lower-calorie sports drinks such as Gatorade G2 and Powerade Zero, even orange juice and apple juice with the introduction of Trop50. This is not a fad; this is a trend. It’s a mega-trend that has been growing for the past 40 years now.”

Seeing that the spirits category lacked low-calorie selections, Voli began developing a vodka-based drink in 2008 to fill that void, searching the world over for ingredients to make a lower calorie but equally satisfying alcohol. They found it in France.

“We started looking at domestic sources and we just didn’t find what we were looking for in terms of taste and aroma, ‘mouthfeel’ and the liquid viscosity that we were searching for,” according to Kamenstein. “So we began looking in France in the Cognac region for a couple of reasons, but primarily because they have a long history of crafting outstanding spirits and liqueur products, and particularly in blending flavors.”

Flavor, Not Pounds
Voli’s vodka, distilled from superior French wheat and pure spring water, has on average 25 to 40 percent fewer calories than leading brands. However, Voli has not rested on the low-cal theme as its only market differentiator. After all, among the many reasons alcoholic drinks tend to be high in calories is because of all the flavorful add-ins – the juices, the creams and the syrups play a big part, and while they may not be healthy, people do enjoy them. So, instead of forcing health-conscious consumers into a corner of gin and tonic, Voli worked with its France-based distillers, long-standing houses of exceptional spirits, to create fruit and fusion flavored blends.

“What we decided to do at the time, and you see more brands doing it now, is the notion of fusing multiple flavors,” Kamenstein explains. “So it’s not just orange and it’s not just vanilla, but it’s an orange vanilla that tastes like a creamsicle. It’s important because we want the low-calorie attribute to stay true to the point of consumption. One big thing that makes vodka drinks high in calories are all the mixers put into it. So if you have to bury vodka in a bunch of juice and high-caloric mixture, you end up with a high-caloric concoction. Voli starts low calorie and we want it to end low calorie.”

Currently, Voli comes in five flavors: original – previously named Lyte – espresso vanilla, raspberry cocoa, orange vanilla and lemon with a soon to be launched mango coconut flavor. Kamenstein explains that the flavor fusions solve a couple of consumer conundrums. Eliminating the need for a bevy of mixtures not only provides a vodka option that is low-calorie and flavorful, but also takes the guesswork out of drink mixing. “You could order a creamsicle with orange juice, cream, vodka and triple sec with 200 and 300 calories, or you can strain our orange vanilla into a martini glass. Same with our raspberry cocoa and other blends” Kamenstein explains.

In June, Voli will release its newest flavor, mango coconut, followed by an in-development but yet-to-be-named flavor that Kamenstein says is “the best thing he’s ever tasted.” The mystery flavor should be launched in September.

Celebrity Clout
As Voli perfects its new flavor fusions to be introduced to the market, Kamenstein says the brand plans to enter new spirit categories by the end of this year. It will offer more options to its consumer base, which Kamenstein describes as people who live a “balanced lifestyle – those who don’t live to work out and eat right, but eat right and work out to live well.”

Targeting the young professional crowd of 25 and older, Kamenstein says Voli enjoys a drinkership of approximately 60 percent women and 40 percent men. When it launched in 2010, Voli was only present in four markets, Kamenstein says. Now it has a national platform and is backed by two successful music artists who are known on an international scene.

Cuban-American crossover artist Pitbull and Black Eyed Peas front woman Fergie are part owners of Voli Spirits. A mutual friend introduced Kamenstein to Pitbull who in turn introduced the brand to Fergie. Both of them made an immediate connection with the brand.

“Pitbull loved the concept and what we were doing,” Kamenstein says. “He’s excited about it, and as we got to know each other I discovered what he had to offer as an artist, a businessman and an individual. His work ethic and commitment to building the brand is terrific for us. We are also excited about him because of the demographic he pulls. He’s very much a crossover artist and pulls the general demographic, that we focus on, but he’s also extremely popular in the Hispanic demographic, which is a very underserved market.”

Likewise, Fergie also comes with a unique appeal. The songstress actively has promoted the brand including a “Rachael Ray” show segment where she made veggie cocktails using Voli Lyte. “She has many opportunities to become involved in several brands, but she only involves in things where she feels an authentic connection to it,” Kamenstein explains.

“She loved the concept and what we are doing and the taste of it,” he adds. “We loved her because she really captures the general market of living a balanced lifestyle – which is having tons of fun but also being professional and socially responsible.

“Pitbull and Fergie capture fitness and a healthy lifestyle coupled with fun and glamour,” Kamenstein continues. “It’s an absolutely perfect personification of what the Voli brand is all about.”