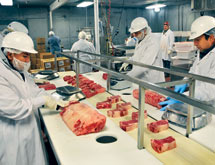 When customers sit down at a high-end Southern California restaurant, they expect the best – and that’s what West Coast Prime Meats provides. “The fact that our principals are from a restaurant background and still involved with other restaurants means we have a high sensitivity to what restaurants need, which is high quality, great service and fair pricing,” President Ray Nicholas says.

Founded by the principal partners and management team of the 45-location Claim Jumper Restaurants in 2011, West Coast Prime Meats was formed as a spinoff company to cut steaks for white tablecloth eateries. It has experienced phenomenal growth and is projecting a 38 percent increase in revenue for fiscal year 2013 over 2012.

What makes the West Coast Prime Meats story so compelling is that the business combines the best of the restaurant and wholesale protein industries.

West Coast Prime Meats is quickly becoming the leading choice for the highest-quality products and services for the finest restaurants, hotels, resorts and country clubs. West Coast Prime Meats understands restaurants need excellent-quality products and service as well as customization and flexibility. It carries a wide variety of items and offers deliveries Monday through Saturday in most areas, which sets it apart from competitors. It will deliver next-day orders turned in as late as 8 p.m., which others do not.

“If somebody wants to order at 7:55 p.m., we have a late production crew and get it out next day,” Nicholas says. “That’s the flexibility we offer. [Other companies and broadliners] may have an 11 a.m. or noon cutoff time because some have to buy from other meat companies.”

It’s a great feature, he says, because many restaurants wait until after dinnertime to place orders, so having the ability to place orders later for next-day delivery “makes it very convenient” for customers.

Custom Orders
Clients have access to West Coast Prime Meats’ production team to customize products to individual specifications, essentially making it an extension of any customer’s kitchen. Its clients include restaurants at the Beverly Hills Hotel, the Ritz-Carlton in Laguna Niguel and the Ojai Valley Inn & Spa near Ventura, Calif.

“We are able to cut and deliver whatever the specifications are,” Nicholas says. “We remove obstacles. There are no set rules. We want to make it easy on the customer.”

West Coast Prime Meats has many capabilities that differentiate it from competitors, including a full grinding operation with 25 different beef blends. It also grinds pork, veal, lamb and poultry. About 65 percent of its business is beef-related, 20 percent lamb, veal, pork and other meat and 15 percent poultry. It also offers a fresh seafood program and wild game. It has a complete poultry production room that can accommodate clients’ specifications. It has marinating options for poultry and other meat offerings including teriyaki, maple/brown sugar, garlic, mesquite and “tender and juicy.”

West Coast Prime Meats operates a dry age room for an old-world, hearty beef flavor. Humidity and temperature levels are monitored around the clock for consistency.

The flagship of its operation is the portion control production department, staffed with many long-time employees who are experts at consistently producing specifications to order week after week.

Additionally, its premium beef line, 1855 Black Angus from JBS Swift, is an “upper two-thirds” Choice and Prime program that use only the best-fed cattle from ranches in the heart of cattle country. The product is processed from only one packinghouse, which guarantees the highest consistency possible.

Sales growth has been extraordinary, and West Coast Prime Meats has completed construction of an additional 2,300-square-foot chilling cooler to handle increased demand.

Sales and accounting offices have been renovated, its sales force is growing and West Coast Prime Meats is excited about the completion of its new test kitchen, which will allow it to demonstrate new products.

Though its industry is highly competitive and “nothing can be taken for granted,” Nicholas says, the Southern California white tablecloth sector is strong. West Coast Prime Meats “seldom see[s] empty parking lots” because “the economy continues to improve in this area,” he says.