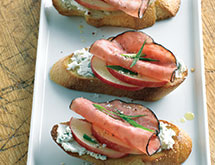 “We are a farmer-based co-op,” President and CEO Ed Garrett explains. The co-op’s main facility had been a Kraft Foods operation until Kraft owner Philip Morris Companies Inc. closed the West Liberty, Iowa, plant in 1996. At that time, 47 Iowa turkey farmers formed the turkey co-op and assumed the business by purchasing the plant.

West Liberty Foods now operates two plants in Iowa, one in Utah and two in Illinois. “The majority of our business is slicing deli lunchmeat,” Garrett says, “but we have been expanding our portfolio over the past several years.

“In addition to processing 5.4 to 5.6 million heavy tom turkeys per year, we also process more than 168 million pounds of non-turkey products including chicken, pork, and beef annually.”

The company is one of the top-10-largest turkey production companies in the United States.

Bold Buy
In June, West Liberty Foods purchased the assets of bankrupt Quantum Foods of Bolingbrook, Ill., and recently brought its meat processing operations back online. Quantum Foods specialized in raw beef and were known for their steaks, among other things. The Bolingbrook purchase consisted of three buildings that had been shuttered: a 220,000-square-foot production facility, 250,000-square-foot cold-storage distribution center and an 80,000-square-foot culinary facility.

The operation specializes in portion-controlled, restaurant-quality product, Garrett says. “It was a good acquisition,” he notes. “This gives our customer base a bigger toolbox to select from. We plan to continue to grow it and enter into new product lines.” The plant’s equipment is capable of producing chicken strips, fajita-style chicken, formed and batter-breaded products, to name a few. However, it was previously lacking proper equipment, Garrett notes. There are currently 200 employees working onsite, and the headcount could increase to between 400 and 600 positions.

West Liberty Foods purchased the assets ahead of a planned summer auction last year, which was then cancelled. “Right now, we are focused on getting the Bolingbrook operation up and running at full capacity,” says Michael Quint, vice president and chief customer officer. “It is going very well. It is a step-by-step process.”

The addition was necessary because the other plants were running at full capacity six to seven days per week. “This will allow us to rebalance our other facilities,” Garrett says. That, in turn, will allow for greater success for its private label, foodservice and co-packing businesses.

Food Safety
West Liberty Foods’ focus on food safety is second to none.

In fact, it holds a patent for its clean room food processing system that reduces the likelihood that pathogens will be able to enter the food processing facility, or spread should they be able to enter. The patented facilities include a number of separate rooms for processing food products, each with its own processing lines, air handling systems, drain systems, supplies and tools. Different air pressures within the various areas of the facility limit the possible movement of airborne food pathogens and sanitizing stations are in place between the various areas of the facility.

The food safety processes make the entire company better,” says Gerald Lessard, vice president and chief operating officer. “We respond to any customer concerns very quickly. I think we are pretty darn nimble with a rapid decision-making process. This is a dynamic, fast-paced organization.

Food safety has become a bigger part of the equation,” he explains. “Our patented clean cell technology has been in play since 2003. From a slicing perspective, it is very important to West Liberty Foods.”

Cleaner Labels
A top industry trend that impacts West Liberty Foods has been the continuing drive to improve the quality of products with “cleaner labels.” Ingredients that were common three, four and five years ago have been removed and antibiotic-free offerings are now available.

“Our customers have asked us to do better and provide healthier deli meat and grilled products with clean labels, so that has been a big push for us,” Garrett says.

West Liberty Foods has enlisted the help of their five High Pressure Pasteurization (HPP) systems to create cleaner-labeled products. HPP is a non-thermal process that provides enhanced food safety and a longer shelf life of products, while reducing dependence on preservatives. This process uses water under very high hydrostatic pressure that destroys harmful food bacteria while maintaining fresh food characteristics, such as flavor, nutrients, and nutritional value. The ability to HPP both retail and foodservice products allows for an added level of enhanced service and value to their customers.

Less Landfill
West Liberty Foods has won accolades for its landfill-free program under which less than 1 percent of waste is sent to landfills. It is among the first companies in the United States to have the landfill diversion efforts at its plants verified by NSF International Strategic Registrations, a major milestone in the food industry. The company does so to help the environment. When performing its latest landfill-free audit, the company evaluated how much waste each of its facilities was sending to be recycled and composted versus how much is sent to a waste-to-energy facility. It found:

“We have had so much assistance from our employees,” Garrett explains. “The team says they recycle at home so why not at the workplace? We followed the garbage trucks to the landfill to see what is out there. We then figured new ways to use waste items. We take great pride in this.”

The success of the program has led other companies to inquire about how they can do the same. West Liberty Foods has chosen to share the steps it took to become landfill free, so interested companies can see that it is not a daunting task, but achievable for any business no matter size or industry.

A Food Company
Now entering its 19th year in business, West Liberty Foods is continuing to grow at record speeds. It can no longer be thought of as just a sliced lunchmeat operator; it is a food company.

“We truly impart the idea that we have a family across the entire organization and don’t use that term loosely. Anyone who has been here any length of time feels it is more of a family here than a business,” Garrett says. “Very few look on it as a job; it is a life activity, no different than a family. That is part of our culture.”