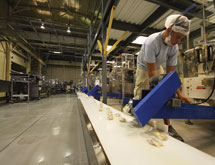 When people try an oyster cracker or a snack cracker made by Westminster Cracker Co. for the first time, the company proclaims that everyone says it’s the best cracker they’ve ever eaten. That’s a bold assertion to make in an industry as diverse and competitive as the cracker business, but the fact that the Rutland, Vt.-based company has been around for close to two centuries is a testament to its quality and popularity, Chairman of the Board Jeffrey M. Walters says.

In the past 10 years alone, Westminster Cracker has received more than 20,000 fan letters, and it continues to take telephone calls and receive e-mails daily from people who just want to say West-minster’s crackers are the best they’ve ever had. “These unsolicited testimonials that we receive are a very satisfying affirmation of the loyalty, stature and following that the company built over many years with its customers,” Walters says.

No other product compares to the Westminster oyster cracker, and consumers know it, Walters says. “We’re quality fanatics,” he asserts. Unlike its larger competitors, Westminster utilizes all-natural ingredients, no preservatives, a slower baking process and a proprietary double fermentation process with its dough. These techniques produce a higher-quality and more artisan product.

“The competitors’ crackers dissolve when they’re put into soup and, frankly, turn into a congealed mess,” Walters says. “If you enjoy eating soup, you want to have a crispy, firm cracker – not one that gets soggy and ruins your soup. The Westminster cracker is like a little baked biscuit that goes into your soup and retains its crunchiness.”

‘Quality is Critical’
“Westminster Cracker is an iconic brand that is synonymous with being the best, and it has a great New England heritage behind it,” Walters says.

The company was founded in 1828 by Alfred Wyman in Westminster, Mass. The original building in which the crackers were first produced still stands. Today, it is a registered historic landmark and is depicted in the company’s logo. In 1898, the Dawley family acquired Westminster Cracker. In the early 1980s, Pillsbury purchased Westminster’s cracker meal business.

In the late 1980s, descendents of the Dawley family restarted the business in nearby Rutland, Vt. Massachusetts-based Cain’s Foods acquired the company in 2003. In late 2009, LaSalle Capital Group, a Chicago-based investment company, purchased the company from Cain’s in late 2009.

Walters co-founded LaSalle Capital and is quite possibly Westminster Cracker’s biggest fan. “I love soup, and this was always my favorite cracker,” Walters remarks.

“We are active in making investments in the food and beverage industry, so when this opportunity came up, I immediately recognized the brand,” Walters continues. “I thought the product was outstanding and have been a satisfied cus¬tomer for many years. We felt there was a substantial opportunity to expand the business beyond New England and give it more of a national sales orientation.”

LaSalle Capital plans to expand its foodservice distribution and retail presence nationwide by developing new shapes, sizes and flavors to complement its traditional oyster cracker. “We see Westminster Cracker becoming a platform for a family of cracker-related products,” Walters says.

Westminster Cracker has grown despite a tough economy, an achievement that Walters attributes to the quality of the company’s product.

“Westminster crackers are increasingly in demand by leading restaurant chains across the country that want to present a more premium image with the soups and salads that they serve, and we are able to capitalize on that trend,” he notes. “Quality is critical. Quality is how we define ourselves, so we will never do anything to change the quality of the product.”