Back to Profile Gallery > Westshore Pizza 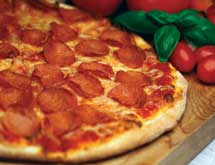 Philadelphia-style pizza is similar to other East Coast varieties, like New York or New Haven – thin crust, fresh ingredients, nothing frozen – but with a Philadelphian twist. Acquired in September by Bella Petrella Holding, Westshore Pizza has been bringing that twist to Florida since it opened its first store in 1994 in Tampa and named the company after Florida’s West coast.

“This place looks nothing like it did 15 years ago – even five years ago,” Operations Director Tyrell Reed insists about the company’s original location. “There are always changes being made around here – new lighting and equipment – we’ve added TVs and music to give the customer a better experience.”

This innovation is what keeps Westshore Pizza as fresh for its customers and franchisees as its food. Offering a menu of dishes in addition to its freshly made, hand-tossed brick oven pizza, there is something for all tastes in the Westshore concept.

The menu includes Philly steaks, grinders and calzones for delivery or sit-down service, along with hamburgers, hoagies, stromboli, appetizers, salads, submarine sandwiches, wings and dinners made fresh from scratch. “It’s not fast food – it’s a little different than what most pizzerias are offering in Florida,” Reed maintains.

For one thing, Westshore offers what it claims is the largest pizza in the Tampa Bay area – 18 inches in diameter. “All the ingredients are top-quality ingredients,” Reed emphasizes. “We cut no corners in preparation – no frozen product, nothing that comes from a commissary – everything is fresh and prepared in that way.”

This includes California tomatoes, hand-grated Wisconsin mozzarella, dough made fresh twice daily and the USDA-choice meats that highlight the sandwiches and cheese steaks. The Italian bread is baked in the company’s own bakery from an authentic Philadelphia recipe.

Reed is involved with many aspects of the company but especially training. “We’re a small team – everyone is involved with every part of this process,” he says. Starting with the company while in college as a grill cook, he worked his way up through assistant manager to store manager to managing multiple units and then to corporate.

Now he gets involved with training for new franchise locations and builds relationships with franchisees daily. The company trains cooks and managers for each location. “We do three weeks of training in our training location – the original store in Tampa – and we also do three weeks of onsite training when the store opens,” Reed declares. Three to four Westshore employees do the training of a location’s staff, which depending on the size of the location, can vary from a dozen to up to more than 50 employees.

Westshore Pizza – which has 34 locations in the Tampa-St. Petersburg area – has been expanding recently in Ohio. The company has one store each in the areas of Columbus, Cleveland and Cincinnati – in Mason, Dublin and North Royalton, respectively – and plans at least 20 more locations in central Ohio and Cincinnati in the next 10 years. Further expansion is planned in northern Kentucky and additional southeastern states.

Baseball is referenced on the logo of Westshore Pizza, and that association is maintained at several spring training and minor league baseball parks at which the company has locations. Westshore Pizza menu items are available at Brighthouse Field in Florida, where the Philadelphia Phillies hold spring training, and at Steinbrenner Field, where the New York Yankees play their exhibition games.

The company’s products have been available at Steinbrenner Field for four seasons. “We have a great relationship with the Yankees,” Reed asserts. The company’s food also is sold at the parks when minor league teams play there. “Some of the marketing is handled on the franchise level,” Reed says. “We do lots of radio and TV, along with email and direct mail. Social media has emerged as a great tool to stay connected with our customers.”

Radio and television advertising is handled by Westshore for franchisees. “We build relationships and negotiate the best deals to pass along to our franchises,” Reed notes. “A group buy is always a much better deal for us.”

The company – which has a television commercial running full-time in the Tampa Bay area – also sponsors circuses and monster truck events. “We try to stay pretty recognizable in this market,” Reed points out.