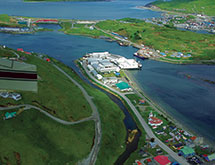 If you enjoy king crab, snow crab or fish filet, your favorite seafood product might have come from fisheries in Alaska managed by Westward Seafood Inc.

Founded in 1989, Westward Seafood built a processing plant in Dutch Harbor, Alaska, which took about two-and-a-half years to construct. It was able to process crab from the Bering Sea by 1991.

Westward Seafood’s primary product is pollock, a mildly flavored whitefish. It is used for a number of different functions, including fish filets; imitation crabmeat; surimi, a paste made from fish; or kamaboko, a process in which fish are pureed and formed into loaves and steamed.

Pollock can also take the form of pollock roe, or mentaiko, a long-time delicacy in the Japanese market. It is served with onigiri (rice balls) or sake and generally given as a gift during the New Year celebration. However, mentaiko consumption is in decline because it is seen as a very traditional product to the younger generations of Japanese, so Westward Seafood is seeking new markets in the United States and Europe.

Westward Seafood also supplies crab. The snow crab can be found at all-you-can-eat crab restaurants and popular chains, such as Red Lobster. King Crab, however, is a premium product sold in both the United States and Japan often for more than $10 per pound.

Thanks to these products, the company grew exponentially during its first 10 years in the business. It now employs 450 people year-round, but grows to 1,200 employees during peak seasons. Now, along with its sister companies, Westward Seafood occupies 30 percent of the dedicated pollock fisheries in Alaska.

The company strives to provide better products daily through lean manufacturing techniques and Kaizen, the Japanese ideal of getting incrementally better with each year and routine. “It’s a very humbling and serious responsibility we have to make sure the product gets to market in the most efficient way possible and that people have the most enjoyable and healthy product to eat,” President Mark JoHahnson says.

Building a Community
Finding skilled people to work in the Alaskan fisheries has become more challenging every year. Many people in high-tech fields prefer to work in the ‘lower 48’ or if they do go to Alaska, Westward Seafood must compete with the petroleum industry for workers.

JoHahnson is not discouraged. “We’re doing a lot of outreach with local community colleges, technical and trade schools and military programs, where retired military people who have learned great skills are able to bring some of those to us,” he explains. “We teach them the fishing business. We’ve even reached out to local trade schools and are trying to attract people from rural communities.”

Westward Seafood hopes to automate many of its processes in the next few years. But that brings about another issue: finding a different kind of skilled worker to operate the machinery and maintain quality in its operations.

“We are proud to work with the Native Corporations of Alaska and have partnerships to employ people who are learning office skills, trades and engineering,” JoHahnson says. “Most of our permanent employees live in Alaska so we are community focused. We’re a large independent business but we recognize that we are a humble part of an even larger community.”

Sustainability is Key
The fisheries in Dutch Harbor are protected by The North Pacific Fishery Management Council. The governmental body regulates fishing for private enterprises with quotas in an attempt to conserve the population and preserve the area.

With more than 50 percent of all U.S. seafood harvested from the Bering Sea, sustainability is a major concern of scientists, the government and fishing industry so that both the fish population and businesses can thrive. There are habitat protections in place, along with some areas completely closed off to fishing and trawling.

“The fishing industry in Alaska realizes we can’t degrade the resource, or we won’t be in business for long,” JoHahnson explains. “We have a very long-term focus. We do everything in our power to preserve and enhance the fishery so that it will continue as a resource for the world’s people in perpetuity.”

Thanks to the regulations in place, the Bering Sea is the only one of the four major ocean basins that has not experienced overfishing or fishery collapse in the last 40 years. “We are proud to say that we have a wild, nutritious, sustainable, low-carbon footprint product that helps feed a hungry world,” he says.

Westward Seafood also closely follows the work of scientists to understand more about its products and how to utilize 100 percent of every fish caught. “Every year we learn more about the properties of fish products and the potential to use them in a wide variety of applications, from cosmetics to nutritional supplements to traditional menu items,” JoHahnson says. “We’re doing a lot to understand the components of fishes, like omega-3 fatty acid, and their impact on human, environmental and animal health. It’s exciting to be in an old business, but also on the leading-edge of healthful trends.”

Westward Seafood believes the overall fishing business is ultimately good for the world.

“We know that not all fisheries are well managed, so we want to get the word out that our Alaskan fishery is an example of sustainability through the cooperative efforts of government, industry, local communities and science,” he says. “Hopefully the example of the Alaska brand will influence how other fisheries are managed. We take that responsibility very seriously.”