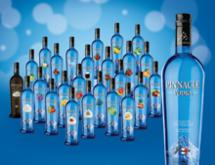 White Rock Distilleries has owned the Pinnacle Vodka brand since 2003. However, before 2007, the Lewiston, Maine-based company focused its efforts on developing Three Olives Vodka, while Pinnacle in effect watched from the sidelines. When White Rock owner and CEO Paul Coulombe sold Three Olives to Proximo that year, he turned White Rock’s attention to Pinnacle, which already had experienced some organic growth. Since that decision, the brand has grown five-fold, and its fast success has caused others to pay attention, as well.

The Charles Schwab Impact Awards named Pinnacle Vodka a Hot Brand three straight years from 2007 to 2009. The Beverage Testing Institute gave it the gold seal of approval in 2007, 2008 and 2010. Also, Beverage Information Group has named it one of its Growth Brands every year since 2008. With all this recognition, it’s safe to say Pinnacle is no longer watching from the sidelines; instead, it has seen a kind of overnight growth that can only be attributed to a real winner.

“The recession hit around the time when we sold [the Three Olives] brand in October 2007,” says John Suczynski, COO of White Rock. “Since then, the industry hasn’t seen any slowdown in consumption, but what we firmly believe is that people have dropped down a shelf and are looking for more value in their alcoholic beverages.”

As the economy would have it, Pinnacle’s shelf status falls in line with many consumers’ pocketbooks without sacrificing taste.

However, Suczynski says the company’s 2007 switch of focus to Pinnacle was not a result of consumer uncertainty. Recession or no recession, Pinnacle was ready for a big promotion. The brand’s lower price and high-quality taste have made it the right product at the right time. Pinnacle sales earn more than half of White Rock’s revenue, and in 2010 the company sold 1.4 million cases.

“Pinnacle has existed since 2003, but in the past three years the brand has really blossomed,” Suczynski explains. “We have about 100 different brands in all and have probably 20 brands that make the bulk of our business, but Pinnacle is by far the most popular product that we sell.”

The growth is a result of a well-made product combined with innovation.

The French-imported vodka is produced in small batches using wheat grain from Brie in northern France, and is quadruple-distilled with spring water also from northern France. But though the time-honored recipe has not changed, White Rock’s energy around it has.

Needing a new top seller, in 2007, the company set out to proclaim Pinnacle’s smooth, clean taste. French descent and easy “mixability.” The decision was spearheaded by owner and CEO Paul Coulombe, whose family has owned White Rock since 1971.

With the company now in its 40th anniversary of Coulombe ownership, the White Rock team has developed an intuition for successful brands.

Pinnacle saw early success in states like North Carolina, where in 2007 it was the third best-selling vodka with 26,000 cases. By the close of that year, case sales had increased across the United States by 75 percent. Pinnacle was the No. 10-imported vodka in the country, and the company launched an advertising campaign to build buzz.

In 2008, White Rock announced an aggressive $7 million, 12-month schedule of full-page advertisements placed in national magazines such as Time, Sports Illustrated, Vibe, Rolling Stone and Playboy. The media launch, designed by White Rock’s in-house creative team, was a success, garnering distribution sales and industry praise. In 2010, White Rock launched its Pinnacle whipped cream flavor vodka, propelling it to greater popularity. The classic 80 proof is still its best selling Pinnacle, but the whipped cream flavor has caught the buying power of many women. Pinnacle has placed ads in US Weekly and Cosmopolitan in response. It is officially its most popular Pinnacle flavor, selling 225,000 cases in less than a year by March 2011.

“We work with key flavor vendors to create new and innovative products,” Suczynski says. “The whipped cream product, which we are selling right now, was produced almost a year ago last May, and it has really taken off. It’s a really hot product and has given us tremendous growth in the past 12 months.”

On the heels of the whipped cream-flavored vodka’s success, White Rock released its cake-flavored Pinnacle Vodka in April. All of the Pinnacle flavored vodkas sold in the United States are created by White Rock.

“One of the things [Paul Coulombe] has always been very firm about is a high-quality product and that includes high-quality flavor,” Suczynski says. “When we go out to seek flavors for a new vodka we are always looking at the very best taste we can achieve and a price is usually not a primary concern on our end because the high-quality flavor makes a huge difference in the overall taste of the product.”