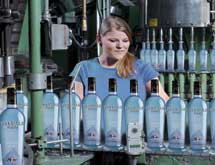 Producing just about every type of spirit enables White Rock Distilleries to benefit from trends in the market. Among the hundred of spirits the company produces are vodkas, tequilas, gins, rums, whiskeys, brandies, pre-mixed cocktails and liqueurs. “We’re not in every single category, but we try to be as diversified as possible,” says Bill Dabbelt, White Rock’s president. But what success in the spirits industry really depends on is strong distribution.

“You have to have a good distribution network, a motivated, professional sales force and a lot of hard work,” Dabbelt emphasizes. “Without that, you don’t have the staying power in the marketplace and you won’t be successful. It’s not as easy as it seems.

“Distribution is a lot of travel, a lot of face-to-face meetings with our distributors and state purchasing agents,” he adds. “We have 25 people in the field out there calling on our customers every day face-to-face. It can take us up to two years to get a product into all the states.”

Sales in liquor stores account for 85 percent of all spirits sold, Dabbelt reports, so that is where the company concentrates its efforts. These include the right shelf visibility and spread, adequate environments, the right pricing and the right adjacencies with competitive products. “These are the ABCs of distribution for any retail product,” Dabbelt points out.

Additionally, White Rock Distilleries uses promotional items and giveaways to publicize its products along with tastings in stores and bars where legal. “Although we have limited manpower, we promote heavily,” Dabbelt stresses.

The right pricing has become more important since the economy slowed, Dabbelt observes.

“It’s becoming a more competitive pricing environment in the last three years,” he says. “Consumers are looking for value more than ever.”Irresistible packaging supplied by the company’s in-house marketing company is an important part of the marketing equation, but as the old saying goes, no amount of marketing can make a silk purse out of a sow’s ear.

“Packaging is very important in today’s world,” Dabbelt insists. “But it takes more than just that.”

“You put multiple pieces of equipment onto one basic frame so you can get high-speed equipment with a smaller footprint, which is very important to a company like us that has one of the smaller facilities in terms of square footage,”  explains Joseph Werda, director of operations. The company fits six bottling lines that run at a speed of 180 bottles per minute into approximately 50,000 square feet, spread out over several separate buildings. “It also allows us to use tool-less quick-changes in as little as 30 minutes that handle individual bottle types and sizes.”

White Rock Distilleries also has increased the throughput on its continuous carbon treatment process, which is used to add character or remove undesirable characteristics from products more quickly. “The real secret to carbon treating is how long the product is in contact with the carbon to allow the carbon to do its job,” Werda notes.

Instead of adding carbon on a batch-by-batch basis, the company developed and built its own proprietary carbon treatment process that runs continuously. The company also has installed a state-of-the-art reverse osmosis water treatment process. “Different companies set different standards as to how far the water can change before they regenerate,” he explains.

White Rock Distilleries has hundreds of SKUs of products and turns over its warehouse inventory every two weeks. “We’ve also been developing our own computer operating system for being able to actually manage our business,” Werda adds.

“Our company has been successful with proprietary brands that offer high value for a reasonable price,” Werda notes. “I think the development of new products and continuing to offer specialty items – the ability to be fast on your feet and deal in niche items – is very important.”