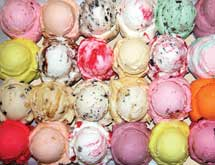 Employees at Whitey’s Ice Cream – founded in the depths of the Great Depression in 1933 by white-haired Chester “Whitey” Lindgren – work hard to do more than just manufacture and sell ice cream. Their charitable work is well-known and usually involves their weapon of choice – ice cream. “Our culture is to give back to the Quad cities, which has given to us,” declares Jeff Tunberg, who is a vice president and co-owner along with his brother Jon.

So when a customer with a husband in the National Guard suggested helping U.S. troops by selling ice cream, a special flavor was created just for that purpose. Sgt. Camo is an ice cream that tastes like s’mores – the popular campfire concoction of graham crac­kers, chocolate and marshmallow – but looks like military camouflage. Marsh­mallow-flavored ice cream colored green is broken up with swirls of homemade fudge and graham cracker ice cream.

“Fifty percent of sales for the first three months of that flavor was donated to the Military Warriors Support Foundation,” Jeff says. Now all the profit goes to groups that benefit veterans of the U.S. Armed Forces. When the flavor was introduced in 2009, Whitey’s sent the ice cream to the 72nd combat battalion at Fort Bliss, Texas, and sponsored a free ice cream social there for 3,000 troops. The event received extensive press coverage.

Whitey’s created an ice cream call­ed Elephant Trunks to benefit the local zoo and children stricken with cancer. Viking Pride – peanut-butter-flavored ice cream with Oreos and fudge swirled through – was created to celebrate Augustana Coll­ege’s 150th anniversary. “We have a variety of ways to be charitable and fun at the same time,” Jeff says.

The Tunbergs do not see much difference in the taste of the ingredients used in ice cream nowadays, but they can tell you what makes their product unique. “It’s eatability,” Jon explains. “It’s a high-quality ice cream that isn’t so high-fat that you can only eat one dip or two spoon­fuls. There’s nothing in our base mix that is made to cheapen the product or extend it. We only use the finest ingredients that we can find without being too far off-the-wall.

“We want to be an ice cream eater’s ice cream, where you choose the two-dip rather than feel full after one dip.”

“Ice cream really should be bought like cheese – by the pound – because there’s air in ice cream, and air is free,” Jeff points out. “Our container weighs anywhere from 4 to 5 ounces more than our competitors’, but people haven’t been educated that way.”

Whitey’s keeps its premium ice cream “eatable” by maintaining its fat content at 12 percent rather than the 16 to 18 percent butterfat used by other super-premium brands. Supermarket brands used to contain 10 percent butterfat, but now low-fat ice creams lower that thres­hold to 4 to 6 percent butterfat.

“We have a product that has half the cal­ories – you get one dip instead of two,” Jeff jokes.

Whitey’s manufactures approximately 600,000 to 700,000 gallons of ice cream annually at its 15,000-square-foot production facility. “The bulk of that goes to our stores, but we service about 100 grocery stores and do some private label for other companies under their name,” Jeff says. The company uses a more traditional process to make its ice cream that is less computerized.

“We’re pretty labor-intensive here – we have machinery that dates to the 1950s and ’60s,” Jeff relates. “We take care of it really well, but we think it makes better ice cream. It’s machinery that makes ice cream still an art rather than a science. There’s a lot more hand effort in it.”

“They use 500-gallon-per-hour freez­ers, and we use 300 gallons per hour,” Jeff explains. “It’s like a giant soft serve machine. It’s a continuous freezer.

“Once you get the weight and temperature settled, it will supposedly hold those calibrations as long as you’re making ice cream.”

When Whitey’s started, the company had one 10-gallon batch freezer that pro­duced approximately 60 gallons per hour. To increase production, they kept add­­ing batch freezers until they eventually had three or four. At that point, they decided to use three or four continuous freezers. “Now, we can make ice cream at 600 gallons an hour, and fortunately, there is a demand to do that,” Jeff says.

Because the company that made Whitey’s freezers discontinued production of them, Whitey’s has eight continuous freezers in a warehouse that can be used for parts to repair or replace those in operation.

“We have an advisor, an 80-year-old gentleman in the business his whole life – he has forgotten more about ice cream than we will ever know – he says the equipment of today doesn’t match up with the heavy-duty stuff made in previous generations,” Jeff maintains.

The new equipment is more efficient and its computerization reduces the chance of human error, Jeff concedes, but “it takes the human out of it,” he says. He explains that the company is dedicated to taking good care of their facility’s equip­ment and can obtain servicing for it in Chicago and Louisiana.