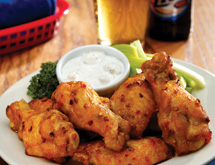 Wild Wing Cafe is a little bit country, a little bit rock ’n’ roll, folk, soul, jazz and a myriad of music styles, depending on the location and the night. From its inception in 1990, Wild Wing Cafe has promoted its great wings and made-from-scratch food paired with live entertainment in most restaurants.

Today, the company started by Cecil and Diane Crowley has 13 company-owned and run restaurants and 21 franchises offering great wings and a platform for up-and-coming musicians to make their mark.

In fact, Wild Wing Cafe was one of the first venues for bands as iconic as Hootie and the Blowfish and the Zac Brown Band, or singers like Edwin McCain and American Idol finalist Elise Testone.

Although the Crowleys sold the company to Axum Capital Partners – a Charlotte-based private equity firm – in January 2012, the couple still owns and manages the Savannah, Ga., location, which incidentally is the company’s largest volume producer.

Fresh Perspective
With a focus on expanding its franchise units, Wild Wing Cafe hired William Prather as its new CEO in 2012. Prather has years of experience in the food industry, having served as an executive at Burger King and most recently as Hardees’ CEO, both predominantly franchise-owned and operated businesses. Prather’s focus in the near future will be to increase the restaurant franchises and improve efficiencies and ergonomics at every location, along with making sure each restaurant is maximizing space and resources and minimizing cost. The feature that will remain the same across the board is the quality of the food.

“The price of wings has doubled in the last year,” Prather explains. “We’re going to work on our efficiencies, we’re going to do some menu diversification, taking out products that are not moving and strategically adding new items to the menu, maybe pizza or ribs. But we’re not going to cut down on the quality or the spec of our wings. We will maintain our quality.”

Learning from Within
To make sure he understood the business from the inside-out, Prather ate at every one of the restaurants and took the training course offered to its franchisees. “I had a chance to see the company from a customer’s point of view and see how the average restaurant is treated,” he explains. “When you go into the training program, you get honesty.”

From that experience, which Prather says was very positive, the new CEO was able to establish some new ways to operate the restaurants, while keeping each location’s uniqueness intact.

Wild Wing Cafe had an efficiency study done at the heart of its restaurants: the kitchen.

“We have evolved over time, but the kitchens did not keep pace with that,” Prather explains. “There is a great opportunity to restructure and shrink in size by bringing the food closer to where it’s prepared.”

The company also restructured the way the wait staff area, bar and dining room are configured in an effort to shorten the travel time and distance between the raw food, preparation area and the final destination – the customer’s table.

Wild Wing Cafe also is exploring new ways of creating added value through its music venues. “We are working on integration of music through our brand and focusing on hot, up-and-coming acts and local favorites,” Prather explains. “We are also partnering with beverage vendors to gain exposure and provide value to the customers.”

Additionally, merchandising is being restructured to have a bigger impact in the revenue generated at the franchise and company level.

“We have 32 great sauces for our wings that can be bottled and sold at our locations, at grocery stores around the country or even at big-box operators,” Prather says. “There is also a greater opportunity to display our merchandise, such as T-shirts and polos, in a more predominant way without being too intrusive.”

Prather understands that to be at the top of its segment, Wild Wing Cafe has to focus on the quality of its food, offering an exceptional product, but he also knows it has to go further than that.

“At the end of the day, it’s the sum of everything you offer: food, service, ambiance,” he stresses. “We want to be the Apple computer of our industry.”