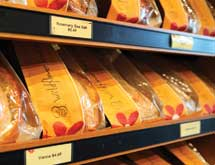 Basile founded Wildflower nearly 14 years ago but notes that he has been in the food industry his entire life. “My dad owned a small luncheonette in East Orange, N.J.,” Basile recalls. “I got the bug quite early.”

When Basile and his wife moved to Phoenix, they did not find any artisan breadmaking establishments in the area. Driven by a desire to preserve the artisan traditions, Basile formed the company, which now has one fresh bread commissary and 11 restaurants that serve breakfast items, sandwiches, salads, fresh pasta, soup and specialty baked items and dessert.

With bread as a key component of its concept, Wildflower utilizes a breadmaking process that lasts several days and enables the company to focus on quality, Basile says. “It’s that entire process that makes our bread special,” he says.

The company utilizes starters daily to mix a variety of dough and add multiple items, including grains, seeds, fresh herbs and fruit. “Once the dough is mixed, we give it time to ferment; this gives bread a web-like cell structure or what some know as bread’s ‘holes,’” Wildflower says. While some bakeries use only two starters, Wildflower uses three, including a rye starter. The quality of its rye-based breads resounds with customers, as they are some of its most popular.

In addition, the bread is shaped by hand. “Some of the basic shapes are rounds, ovals, batards and baguettes,” Wildflower says. “Our bread is shaped at our central commissary and transported by refrigerated trucks to our restaurants. Refrigeration allows the bread to ferment for longer periods of time.”

The process continues at each location. After the bread is given enough time to rise, “Loaves are baked directly on the hearth floor in imported deck ovens,” Wildflower says, adding that steam is infused into the ovens to give the breads shiny appearances and hard crusts. “Hours later, customers walk in to find our freshly baked bread at the end of an almost 72-hour process.

“When it comes to breadmaking, our commitment is not simply to excellence, but the preservation of a true art form,” the company says. “Our award-winning recipes attest to the fact that we take pride in every loaf of bread we produce.”

After nearly 14 years of managing Wildflower, Basile says he still savors the business. “I really enjoy the daily challenges of delivering a great retail experience to customers,” he says. “There’s a lot of pleasure and a lot of rewards in having customers talk to you [and say], ‘Hey, this is my favorite item,’ or ‘This is my favorite restaurant.’”

Additionally, Basile says Wildflower’s restaurants serve as more than just places to eat. “They become places where friends gather, families gather [and] form fond memories,” he explains. “[It] is exciting to be a part of creating memories for people like that.”

Basile adds that Wildflower serves a broad customer base that spans from children to senior citizens. “We have kids who are as young as 7 or 8 [who] say that Wildflower is their favorite place,” he says. “The older senior population [also] appreciates the fact that they can get the right-sized meal for a reasonable price.”

Customers also like the high level of service, Basile says. He notes that Wildflower’s Breadheads will bring customers’ orders to their tables and check on them to make sure they are having a good experience.

“All of those things add onto an experience that works for the youngest of patrons to the older spectrum of customers,” he says. “I think that we really do have that large of a broad-base appeal.”

Wildflower has enjoyed growth in the past year, Basile says. While the company opened two new locations, it also added a new self-service bread market where customers can interact with the staff about its products. This bread market, which is being tested at the two newest locations, allows customers to sample and talk with Breadheads about what type of bread they might like or would go best with a meal. It also is a convenient means to grab an item and pay at the register if in a hurry.

In its newest restaurant, the company also opened a private dining room that can hold meetings for up to 30 people. “One of our ongoing charitable contributions is associated with our private dining room at our new Scottsdale location,” Basile explains. “Five percent of any sales that result from a group reserving the private room will go to the Scottsdale Railroad and Mechanical Society.”

Wildflower also has made additions to its menu, including an Atlantic Haddock sandwich with a new tartar sauce on a grilled Brioche roll. “We’re selling that for the price point of $7.99,” he says. “I think that it’s that sort of innovation and that sort of creativity that gives customers a real reason to choose us.”

Although many companies have been affected by the economy, “We really believe that we have a formula [to survive it],” he says. “It centers around our passion for the business and just being fanatical about that. We want to serve great food.”

The company also is very involved in social media. Active Facebook and Twitter accounts allow it to engage with customers on an even deeper level. Not only does the company use the accounts to have conversations with customers, but also to receive real feedback on products and promotions. This feedback improves both execution and results. Basile believes in social media so much that he manages his own Twitter account, @wildflowerCEO. He regularly delights customers with periodic tweets.

Basile says that Wildflower’s future looks stronger than ever. As the company approaches its 14th anniversary this November, “[We are] looking to expand the brand in Arizona in another market, or another state over the next five years,” he says. “We’re excited about the opportunities that are out there.”