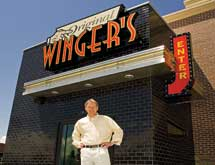 What is the “secret sauce” that kept Winger’s USA growing from one to 41 locations? Well, it’s the “Original Amazing Sauce!” “There are a million sauces, and I can say we just have a huge following of guests and loyal customers who are just, quite frankly, addicted to Winger’s original sauce,” President Eric Slaymaker maintains. “It has a little bit of a unique character and quality to it.”

Winger’s Original Amazing Sauce has a sweeter flavor to it than traditional buffalo chicken wing sauce, which also is offered on the menu. “Since we originally invented it, it’s been over 20 years, and it keeps growing in popularity – why, I’m not sure,” Slaymaker concedes. “Maybe it’s luck – we just hit the nail on the head.”

The most popular dish at the full-serve restaurants are the boneless chicken wings made of chicken tenders slathered with the original sauce, which Winger’s calls Sticky Fingers. Winger’s USA’s 41 restaurants are located in the inner mountain area around its headquarters of Salt Lake City and in the Pacific Northwest, although it does have new single restaurants in Kentucky and Tennessee and had two restaurants for five years on military bases in Germany due to the U.S. soldiers’ demand.

The typical Winger’s USA restaurant being built now is between 4,200 and 4,800 square feet with a full bar. That bar is such an important part of the Winger’s USA experience that the company has just introduced its own exclusive line of craft-brewed beer.

“We are carrying five of our signature beers from lightest to darkest,” Slaymaker announces proudly. “We feel pretty proud of the beers we’ve created. We only use the top-quality ingredients so the product itself is absolutely top-of-the-line. Our Winger’s guests can come in and get Winger Brothers beers that will compete with any micro or craft brewer. We’re just excited because we feel it is a phenomenal product.”

The beer lineup served only on tap starts with a blonde or golden ale and progresses to a hazy wheat Hefeweizen, a King’s Tale pale ale and a Bootleg porter. “We particularly chose these beers because we feel they really complement the Winger’s menu very well,” Slaymaker notes. “Our fifth in-house craft beer is seasonal, which we change out quarterly.” Last fall’s beer was a pumpkin ale, and when that was gone, a darker winter ale filled the void during that season. The company is in the process of rolling out its beers to all its locations.

Out of Focus Group

The majority family owned Slaymaker Group, of which Winger’s USA is a wholly owned subsidiary, decided to create Winger Brothers Brewing as a result of market research. “We did some focus groups and looked at our strengths and weaknesses, and to be able to achieve the goals we wanted to achieve as a full-service restaurant, you needed to have the full complement of not just food but also beverage offerings,” Slaymaker maintains. “We felt that we wanted to be able to find a way to get into the draft beer offerings in a very unique way and to do something that would be singular to Winger’s.”

The bars in the restaurants move enough beer to justify establishing Winger’s own microbrewery, Slaymaker insists. “After doing quite a bit of due diligence and research, we felt that the best way to go was in a cooperative effort,” Slaymaker explains. The company ended up partnering with a craft brewer in Salt Lake City called Uinta Brewing Co. – named after Utah’s highest mountain range.

“We felt there was a real win-win for both of us in developing this brand together, and we felt that these people were experts,” he emphasizes. Although it has been said that the ingredients in a pint of beer cost less than a dollar, the labor and shipping of it – along with the capital equipment investment and time required to brew it – makes it not dramatically more profitable than the food served in the restaurant, Slaymaker maintains. He stresses that the massive profitability of bars is an urban legend “unless you serve $12 martinis, which we don’t,” he quips.

Eric and his brother Scott grew up in the restaurant business of their father, Norm. He was a Sizzler franchisee in the late 1970s in Alaska and Wyoming, and in the 1980s, he owned a number of Chi-Chi’s Mexican restaurants.

Eric graduated from the University of San Francisco with a degree in business marketing, and in 1986 with Stefano Bronzati he opened a 25-seat restaurant in a railroad car in Salt Lake City named California C&R, which is short for chicken and ribs. “It was built in an old 1940s Pullman train car, so the kitchen was the back half of the train car, and in the front half was some seating,” Slaymaker remembers. “You could probably just squeeze in 20 to 25 people.”

He admits the train car was a bit of a novelty, but when they lost their lease on the land, they had to move the train car. The concept evolved into the first Winger’s USA, which opened in a modular, diner-styled facility in Bountiful, Utah, in 1993. However, they kept the sweet, sticky and spicy Original Amazing Sauce that they had developed in that train car.

On the 25th anniversary of establishing his first restaurant, Slaymaker is celebrating by creating his line of signature beers for Winger’s USA. For the future, the company is seeking franchise partners in Arizona, New Mexico, Colorado, Montana and some portions of the Midwest. “We can get great product to those areas and keep it really fresh,” he asserts. “We also think we have a real unique plan. We can provide our own signature beers matched with our food and do it in a way that provides the same experience that a lot of brewpubs do without having to invest a half million dollars into a full brewing facility on the back of every place we open. That can be cost-prohibitive.”