Back to Profile Gallery > Wisynco 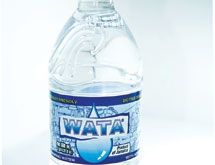 When Wisynco start¬ed in the beverage business, it was focused on bringing the world to Jamaica. Today, the company has expanded that mission by bringing Jamaica to the world.

Wisynco started in plastic goods, supplying its own brand of disposable dishware to its home country. Twenty years ago, it moved into beverages, li¬cen¬sing a number of international names as a certified manufacturer and distributor of those products in the Caribbean.

But before it began licensing others products, the entrepreneurial company came to market with its own.“The first drink we manufactured was a soda called Bigga soft drinks,” says Stephen Dawkins, head of exports of Wisynco. “That’s when we first started out. Right now, we are in 26 markets distributing Bigga soft drinks as our main export of beverages right now. We also distribute water under the brand Wata to a number of Caribbean markets, the main ones being the Cayman Islands, Barbados and Antigua and other small Caribbean islands. And we also distribute Boom energy drinks in a number of Caribbean markets, as well.”

Wisynco is dedicated to serving its own country and its fellow island neighbors. In the long run, its goal is to have a global reach and it already has made headway with Bigga. In addition to the Caribbean Islands, Bigga is distributed throughout the United States, the United Kingdom and Canada.

It is expanding its Northeastern U.S. presence with a recent deal made with the Golden Krust Caribbean Bakery and Grill to be the restaurant chain’s exclusive soft drink supplier.

“There are 120 Golden Krusts that will fully implement this and this distribution will automatically give us the largest volume of Bigga outside of Jamaica,” Dawkins says.

Dawkins expects the visibility within the stores to create more demand outside of the stores. To handle future expected growth, Wisynco has expanded its manufacturing facility.

Dawkins says soft drinks continue to be a growth category in nearly every market, and Wisynco’s deal with Golden Krust supports that claim. However, there are other beverages in demand in the world today.

“We are a distributor of Powerade and Red Bull,” Dawkins says. “The energy drink category is a strong area and that’s why we developed our own energy drink called ‘Boom.’”

Wisynco is working on new products that should debut soon. It is relaunching a brand under its Wata label called CranWata. It was once co-branded with Ocean Spray, but now the company will relaunch the brand on its own.

Drink to That
As a company with entrepreneurialism, innovation and native pride at its heart, Wisynco is committed to developing products that people can enjoy across continents. Its current market expansion focuses, in order, are the United States, United Kingdom and further expansion into the Caribbean – specifically in Trinidad and Tobago. In the next three years, it hopes to move into Central America and into South America. Next, the Jamaican-based company sees its products hitting the African shores, continuing its mission of brining Jamaica to the world.

“We are a fully Jamaican-owned company,” Dawkins explains. “And Jamaica is one of the most innovative countries in the world and unique. We have a very small country – only 2.5 million people – but are a very formidable country and are known by the world over. As a company, we are looking to grow not just in Jamaica but the brand of Jamaica. Even as we take Bigga globally, on our logo it says, ‘I am Jamaican.’ As a people, we are very proud of being Jamaican and we carry the Jamaican brand very proudly.”