Back to Profile Gallery > Wornick Foods 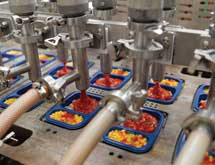 An army travels on its stomach, it is said, and so Cincinnati’s Wornick Foods deserves a lot of the credit for getting America’s soldiers where they need to be. The company was one of three original manufacturers supporting the development of what is now the modern combat ration, the Meal Ready to Eat (MRE). Today, the company continues to lead the way in manufacturing military rations, but it also has adapted its shelf-stable food technology for the commercial foodservice industry.

President and CEO Jon Geisler says the company was founded in 1979, but its origins date back further, when the principals began developing freeze-drying technology to extend the shelf life of food. This led to the company’s involvement in the development of the MRE, and in 1981 the first MREs were delivered. At the time, the pouched entrée components of the meal were provided by large commercial food companies, but founder Ron Wornick decided to purchase a food plant in Indiana to produce entrees for the MRE and other ration programs. All of the company’s food operations are now located in Ohio.

Wornick Foods’ largest customer continues to be the United States government, for which the company still manufactures MREs. However, Senior Vice President of Business Development John Kowalchik says Wornick Foods has room to grow on the commercial side, where it provides portion-controlled, single-serving products as well as packaged frozen goods for national chains.

“Because of the format that our products and our technology are focused on, I would describe the competition as being limited with respect to the number of firms that have core competency in flexibly packaged, shelf-stable foods,” Kowalchik adds.

The marketplace Wornick Foods competes in is relatively small and specialized, but Kowalchik says the company still manages to distinguish itself because of the expertise and technology it puts into its products. In other words, Wornick Foods isn’t simply repurposing its MREs for commercial markets. “What separates and differentiates our company from the competition is the level of investment that we’ve made into commercialization resources,” he says.

Rather than simply stick with what has worked in the past, Wornick Foods has been working consistently to raise the quality level of its products in every aspect. The addition of highly skilled culinary chefs, engineers and project managers have elevated the company’s products above the ordinary in the marketplace, Kowalchik says, and established a commercialization process that presents minimal risk to its customers.

Recognizing that there has existed a certain stigma when it comes to shelf-stable foods, Wornick Foods has infused the company with an “injection of culinary talent,” Kowalchik says. The hiring of numerous classically trained chefs and food technologists has given the company the ability to dramatically expand the range of food categories it can support. Vice President of Operations Michael Hyche says this has allowed the company to develop as complete a meal as possible, with the addition of new sides and value-added proteins and vegetables for customers to choose from.

“The breadth and depth of our product and process capabilities allow us to support our customers in developing products for virtually every meal occasion among many different ethnic categories,” Hyche says. Recently developed products from the company include Mexican-style foods and hot cereals like oatmeal.

To improve and broaden its packaging options, Wornick Foods hired packaging technology resources who have extensive experience in working with flexible, high-barrier films. Wornick Foods now can provide custom end-to-end solutions that would have required the development of new product lines to meet specific functions. “We  collectively offer a turnkey solution that is stewarded by our project management resources,” Kowalchik says.

Even though Wornick Foods is leading the way in the industry, it still has to contend with a number of challenges. Geisler says the economy has made many of the company’s customers reluctant to launch new products. He says that although the number of projects in the company’s pipeline still is robust, customers are much more methodical about project development.

Kowalchik says the company also has to deal with the preconceptions many potential customers have about shelf-stable foods. “We always fight a headwind of a general lack of awareness in what’s possible in the format of the foods that we support,” he says.

However, Wornick Foods continues to evolve and refine its products and processes so that it can be the answer to all of its customers’ needs, Geisler says. “As we have learned, not any one technology is the perfect solution for our customers,” he says.