Back to Profile Gallery > Zaro’s Bakery 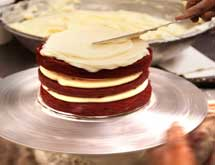 Much has changed in the baking business and world at large since Zaro’s Bakery opened the doors to its first location in New York City in 1927. Food trends have come and gone, baking methods and kitchen technology have evolved and major corporate chains have taken a large portion of a market once inhabited solely by family-owned bakeries.

While Zaro’s, itself a family-owned bakery now in its fourth generation, has grown beyond its single-store origins to 12 locations and a growing wholesale business, in many ways it is still very much the same as when it first opened.

“Our baking methods haven’t really changed all that much,” says Stuart Zaro, co-owner and grandson of founder Joseph Zaro. “We’re still using mixers that were used 50 years ago, and you’ll still see people making things by hand. We do everything the old-fashioned way, from the way we make the product, to our quality control and the way we pack products.”

This year marks the company’s 85th anniversary, an accomplishment Zaro attributes not just to the quality of its products, but also to the devotion of its customers. “People come to us again and again, and that’s one of the things I’m most proud of,” he says. “I like to think that Zaro’s has been a part of these families as much as they’ve been a part of ours.”

The company boasts a number of long-term employees who have worked for there for 25 years or more. “Everybody here has a lot of experience,” Zaro says. “We consider ourselves a family business, and treat everyone like one big family. It’s a good place to work, so they don’t leave.”

Zaro’s produces its products from a 40,000-square-foot factory in the Bronx. The company makes more than 400 different types of baked goods; best-selling products include bagels, black-and-white cookies and various types of bread. Zaro’s also offers a selection of products online for shipping anywhere in the United States at www.zaro.com.

Top-selling products at Zaro’s currently include organic whole wheat breads and pies, as well as smaller items like cookies and cupcakes.

“Way back when we started, we were strictly a bakery and made bread, rolls and cakes,” Zaro says. “After we opened in Grand Central Station, that took us into the lunch business.”

The company prides itself on friendly service behind the counter. “We’re known for our speed of service, our quality, our cleanliness, reasonable prices and our friendliness,” he adds.

Zaro’s took another big step forward just over two years ago, when it established a wholesale component that sells to supermarkets, distributors and corporate customers nationwide.

“We are primarily retailers, but since we’re so well-known in New York and have the factory and equipment to do it, this is a natural next step,” he adds.